Definition: What are chemoorganotrophs?

Some examples of chemoorganotrophs include:

*   Along with chemolithotrophs, chemoorganotrophs make up a larger group of organisms known as chemotrophs.

As mentioned, chemoorganotrophs are divided into two main categories based on metabolic activities. This section will highlight these processes with some examples in each group.

As the name suggests, members of this group use (or can use) oxygen for metabolism. More specifically, oxygen is used as the final electron acceptor. Members of the genera Azotobacter and Rhizobium are some of the best examples of aerobic chemoorganotrophs.

Rhizobia bacteria, commonly found in the root nodules of legumes, use C4-dicarboxylic acids as the source of energy. This organic compound is supplied by the host plant in which the organism resides.

Metabolization occurs through the tricarboxylic acid cycle in the organism. For instance, malate (a dicarboxylic acid) is first converted to pyruvate and carbon dioxide by the DNA+ dependent malic enzyme. It's then transformed into acetyl-coenzyme A by pyruvate dehydrogenase through a process known as decarboxylation.

Acetyl-coenzyme A (acetyl CoA) then enters the tricarboxylic acid cycle (TCA) where it's used to produce ATP energy. Aside from ATP, some of the other products of this process include components of amino acid synthesis.

Although aerobic chemoorganotrophs need carbon compounds and oxygen for metabolism, it's worth noting that the TCA process may vary between different organisms. For instance, as compared to S. meliloti, B. japonicum has been shown to exhibit higher metabolic plasticity during this process.

Once it's transported to the nodules where the bacteroids reside, the sugar is acted upon by given enzymes and converted into a form that can be used by these organisms. For instance, the enzyme sucrase synthase converts it to UDP-glucose and fructose through reversible UDP-dependent cleavage. The enzyme alkaline invertase (AI) breaks down the sugar (sucrose) into glucose and fructose through hydrolysis.

*   Without oxygen, the metabolic cycle cannot produce enough ATP in aerobic chemoorganotrophs. As the final electron acceptor in the electron transport chain, oxygen promotes the flow of electrons which in turn ensures that ATP synthase carries out their functions optimally.

*   With respect to metabolism, oxygen is the best terminal electron         acceptor and helps yield the most ATP.

In cases where some organisms cannot access oxygen, or cannot survive in the presence of oxygen, energy is generated using different strategies. In this case, different electron acceptors have to be used.

*   Some of the most common terminal electron acceptors used by these organisms are sulfate, carbonate, ferric ion, fumarate, sulfur, and nitrate.

*   The amount of ATP produced in these organisms is largely dependent on the type of electron acceptor used.

Escherichia coli and Shewanella, facultative anaerobes, are good examples of chemoorganotrophs that use anaerobic respiration for energy generation. Shewanellae, in particular, can use a variety of electron acceptors including nitrite, elemental sulfur, nitrate, and manganese oxide.

*   Anaerobic chemoorganotrophs that reduce nitrate and nitrite are also known as denitrifiers. The process results in the release of nitrogen gas and small amounts of nitrous oxide and nitric oxide. 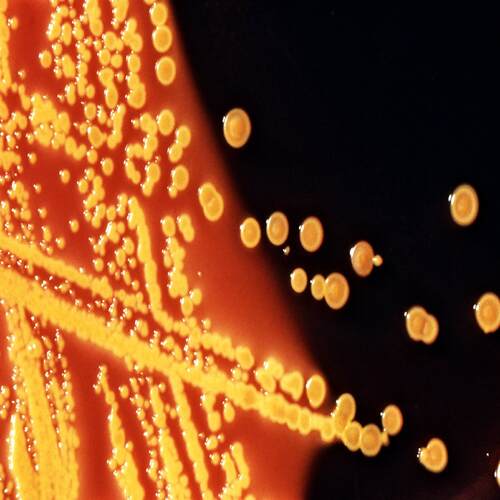 During denitrification, the enzyme nitrate reductase acts on nitrate and converts it into nitrite. Nitrite reductase then acts on cytochrone C (through oxidation) which in turn converts the nitrite to nitric oxide. Further reduction of this molecule by nitric oxide reductase results in the production of nitrous oxide which is then reduced to nitrogen by nitrous oxide.

As is the case with aerobic respiration, anaerobic respiration also begins with glycolysis (breakdown of glucose) with pyruvate entering the TCA cycle. Although using other final electron acceptors (other than oxygen) yields less ATP, these organisms (anaerobic chemoorganotrophs) can inhabit and survive in different environments across the globe. This is even more so for facultative anaerobes which can grow and survive in the presence and absence of oxygen.

Some other examples of anaerobic chemoautotrophs include: Although fermentation occurs in the absence or presence of very little oxygen, it is not the same as anaerobic respiration. Anaerobic chemoorganotrophs can use a number of compounds other than oxygen as the terminal electron acceptor.

For fermentative organisms, however, ATP is generated through substrate-level phosphorylation and oxidation of electron donors coupled to the reduction of electron carriers like Nicotinamide adenine dinucleotide phosphate.

*   In this process (fermentation) ATP can also be generated through other processes such as those carried out by the enzymes fumarate reductase and sodium-dependent decarboxylase.

In chemoorganotrophs that carry out fermentation, the process starts with glycolysis. The pathway followed is largely dependent on the organism. For instance, fermentation of carbohydrates by Saccharomyces cerevisiae occurs through the Embden-Meyerhof-Parnas pathway while the Entner–Doudoroff is used by the bacterium Zymomonas mobilis. This results in the production of pyruvate which is converted to acetaldehyde.

Acetaldehyde is converted to ethanol which takes up electrons produced during glycolysis. In this case, ATP energy is produced through Substrate-Level Phosphorylation.

Some of the other types of fermentation include:

Examples of bacteria that use fermentation for energy generation include: Return from Chemoorganotrophs to MicroscopeMaster home

Liu, A., Contador, C., Fan, K., and Lam, H. (2018). Interaction and Regulation of Carbon, Nitrogen, and Phosphorus Metabolisms in Root Nodules of Legumes.