Also refered to as leukocytes, white blood cells make up 1% of the total blood volume and play an important role of defending the body against infectious agents (virus, bacteria, etc), foreign invaders and infected or cancerous cells. Given that all white blood cells are over 5 micrometers in diameter, they are large enough to be seen using a typical optical microscope (compound microscope).

Staining with Leishman’s stain makes it possible to not only easily identify different types of leukocytes, but also count them. This makes it one of the most ideal stains for a differential count of white blood cells.

* Leishman's stain is a Romanovsky stain that consists of Eosin and Methylene blue dissolved in methanol. * Use oil immersion for high magnification. 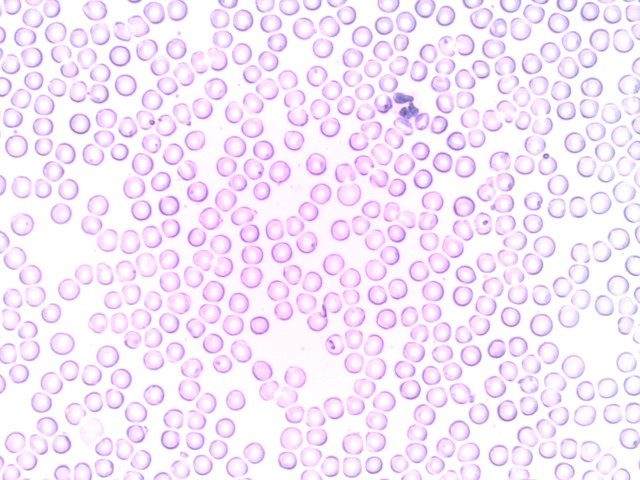 When viewed under the microscope, the smear will show different types of leukocytes as well as red cells. Students will be able to differentiate white blood cells based on their shape and nucleus.

Neutrophils - When viewed under the microscope, neutrophils will appear spherical in shape with a dark stained nucleus that is segmented (2 to 5 lobes). A closer look will also reveal fine granules (neutrophilic granules) and thin threads connecting the nucleus lobes (chromatin threads)

* Neutrophils are often first responders during infection. Death of many neutrophils form pus.

Eosinophils - Compared to neutrophils that may have 2 to 5 lobed nucleus, eosinophils only have a bi-lobed (two lobes) nucleus that is shaped like a horse-shoe. They will also appear spherical in shape with fine granules refered to as acidophilic refractive granules.

Basophils - Compared to the other granulocytes, basophils have a large and irregular nucleus that resides inside the spherical shaped cell. Whereas the nucleus of the other granulocytes are well defined and can be clearly described, the nucleus of a basophil (bluish under the microscope) is large and irregular inside the cell and may prove difficult for students to describe.

* Basophils are responsible for vasodilation during inflammation.

Mast Cells - If present, mast cells are spherical with a large central nucleus and more granules compared to basophils.

Neutrophils, eosinophils, basophils and mast cells are granulocytes. The presence of granules in these cells distinguishes them from agranulocytes that lack granules.

* There are two types of lymphocytes: B-cells (cells that produce antibodies to destroy foreign invaders) and T-cells (responsible for destroying infected and cancerous cells)

Counting white blood cells is of great clinical significance because it contributes to the diagnosis of various diseases. This can either be achieved manually or automatically.

Manual count of white blood cells has been shown to have several disadvantages that include being prone to error and being time consuming.

For this method, students can count the cells on a blood smear (slide) or by using a hemocytometer mounted on a compound microscope. For the smears, white cells are simply counted by scanning several regions of the smear. Here, students can count the number of different types of white blood cells on different regions and calculate the total percentages of each type of leukocyte.

Apart from using a blood smear, a hemocytometer can also be used. A hemocytometer is a special counting chamber with square ruled areas that makes it easier to count cells.

While the chamber is divided into 9 square areas, only 4 (at the four corners of the chamber) of these are used for counting white blood cells. For this method, the grid is scanned for white blood cells that are identified and counted to calculate their respective percentages.

* Although it's possible to count white cells under the microscope directly, students can also capture the images using a digital camera and scan through the images to count the numbers of white cells.

With manual counting, inaccuracies occur due to counting errors (human error) and due to the fact that white cells may not be uniformly distributed across the smear. These issues are addressed by using flow cytometry.

For this technique, red blood cells have to be removed from blood because they are contaminants. This is achieved using ammonium chloride solutions for lysing the red cells. To purify agranulocytes only (peripheral blood mononuclear cells- PBMC) students can use the density gradient procedure, which may involve using Ficoll-Paque PLUS or Histopaque-1077. However, this is not mandatory.

Here, the suspension is made to create a laminar flow that makes it possible for individual cells to pass through an interrogation point.

The cells are intersected by a beam of monochromatic light at the interrogation point which allows for light to be emitted in different directions. The light then emits signals that are collected and analyzed to give the readings.

* While this is a more reliable technique for counting white cells, it has a disadvantage in that one cannot determine the shape or morphology of the cells. For this reason, it's impossible to determine whether the cells are damaged or not.

The numbers/count of these leukocytes can change to increasingly (abnormally) high or low numbers. In a clinical setting, this is indicative that something is wrong and can help with diagnosis.

Analysis of urine using a microscope can be used to determine the presence of white blood cells, which helps in the diagnosis of various diseases.

In urine, the presence of high numbers of leukocytes is refered to as pyuria, which is indicative of an infection in the urinary tract or kidney. In most cases, leukocytes present in urine are granulocytes that can be identified because of their lobed nucleus and granules.

* Due to lack of staining, leukocytes in urine may appear translucent making it difficult for some students to identify them.

Neutrophils - Neutrophils are not only the first line of defense, but are also the most abundant leukocytes. Once released, they circulate for about 10 hours in blood and can remain active for up to 6 days.

* Neutrophils have also been shown to incorporate actin protrustions and integrin linking adhesion in their movement.

Eosinophils - In tissue, migration of eosinophils is controlled by eotaxin-1 (a protein chemoattractant). Here, its migration involves such activities as rolling, adhering as well as transmigration through the endothelium. These processes make it possible for the cells to migrate to specific sites where they are involved in allergic reactions.

Basophils - Basophils migrate to barrier tissues where they release inflammatory chemicals (histamine etc) which in turn have such effects as dilation of blood vessels and constriction of smooth muscles.These effects results in such outcomes as decreased blood pressure.

To reach the inflamed tissue, basophils use three major processes that involve adhering to vascular endothelium, transendothelial migration as well as locomotion through extra vascular tissues.  Activator cytokines also play an important role in the random movement of the cells where they move to the site through chemokinesis.

Monocytes - Under normal conditions, monocytes use adhesion to move. Monocytes make use of such adhesion molecules as α4β1 integrin (VLA-4), and β2 integrins to adhere to vascular endothelium and reach target sites.

At the endothelial junctions, monocytes squeeze between adjunct cells through diapedesis to pass despite their large size compared to other leukocytes. Monocytes destroy invading organisms such as bacteria and other germs by ingesting them as macrophages.

And so, they are capable of transforming into dendritic cells where they process antigen material. This makes it possible for antibodies to identify harmful organisms as destroy them.

Lymphocytes - There are two types of lymphocytes; T lymphocytes and B lymphocytes. T lymphocytes (T cells) make up the majority of lymphocytes (80 percent) and are produced in the thymus. Their main role involves destroying damaged or infected cells.  Also, B cells play an important role of producing antibodies that target and destroy specific antigen.

While the mechanism is yet to be fully understood, studies have shown that chemokines play an important role for adhesion and transendothelial migration of some lymphocytes.

Of interest: What are Viruses?

Check out the Blood Microscopy Page

V. T. Marchesi, J. L. Gowans. 1964. The migration of lymphocytes through the endothelium of venules in lymph nodes: an electron microscope study.