What is the function of Astrocytes?

Where Are They Located?

Overview: What are Astrocytes?

Also known as Astroglia, astrocytes are specialized glial cells (glia) located in the central nervous system (brain and spinal cord). Here, they've been shown to be the most abundant glia and outnumber neurons by a ratio of 5:1.

They are involved in a number of important functions that support neuronal activities including regulating blood flow, energy, metabolism, homeostasis, synaptic function, maintaining the blood-brain barrier, and neural development.

Though they were initially thought to be non-excitable, various studies have shown that they can in fact respond to a number of signals (both internal and external) and send messages to surrounding cells through a process known as gliotransmission.

Generally, astrocytes are divided into 4 main groups (in human beings) that include:

The other types of glia/glial cells are:

* The word "Glia" is derived from a Greek word meaning Glue.

* Astrocytes originate from neuroectoderm and are commonly referred to as nurse cells.

Where Are Astrocytes Located?

As mentioned, astrocytes can only be found within the central nervous system. Here, however, they occupy different regions in varying proportions.

Protoplasmic astrocytes make up the majority of astrocytes and can be found within the gray matter (between the second (external granular layer) and sixth (multiform layer) layers).

They are characterized by highly branched processes and extend to the surrounding blood vessels to form a limiting membrane. As such, they are involved in the formation of the blood-brain barrier that not only supplies the brain with essential nutrients but also protects it from harmful/toxic substances present in the blood.

Like some of the other cells in the central nervous system, they are GFAP-positive. The Glial fibrillary acidic protein is an important protein that serves to support and strengthen the cells.

Some of the other characteristics of protoplasmic astrocytes include:

Diagrammatic representation of a protoplasmic astrocyte: Unlike protoplasmic astrocytes, fibrous astrocytes are located around the white matter tracts.

While they are generally larger in size compared to the former, they express fewer foot processes (less branching) and are less dense. However, the processes originating from the central body are relatively longer (measuring up to 300 um) and envelop the nodes of Ranvier (spaces between myelin sheath along the axon).

Along the white matter tracts, these astrocytes are oriented in a longitudinal fashion in the plane of fiber bundles. This can help distinguish them from protoplasmic astrocytes which are uniformly distributed in the gray matter.

Some of the other characteristics of fibrous astrocytes include:

Diagrammatic representation of a fibrous astrocyte: 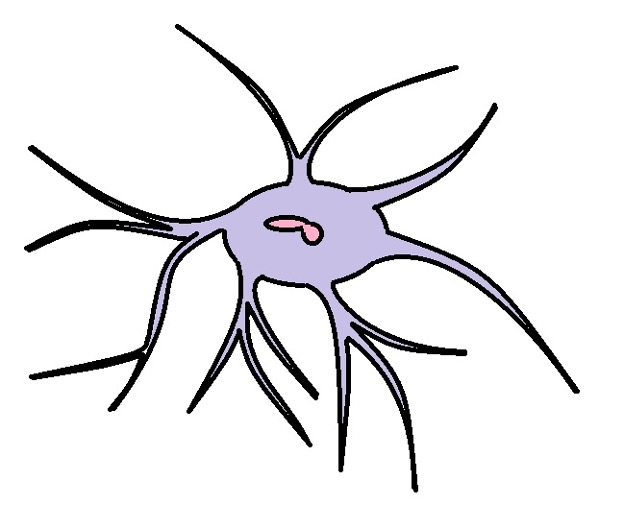 Aside from the long processes that allow them to span many cortical layers, these astrocytes are characterized by spheroid cell bodies in human beings. Primate interlaminar astrocytes, on the other hand, have oblong cell bodies and are fewer in number compared to those found in human beings.

Diagrammatic representation of an interlaminar astrocyte: 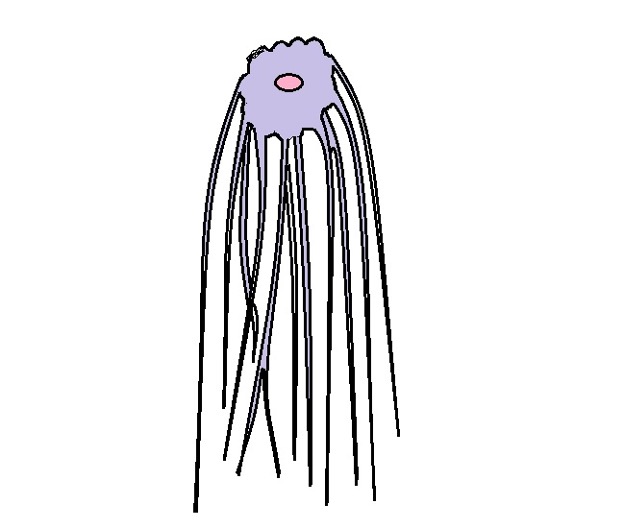 Like interlaminar astrocytes, varicose astrocytes have long foot processes extending from the cell body. However, these astrocytes are located in layers 5 and 6 of the vertical cortex.

Astrocytes play an important role in the formation and maintenance of the blood-brain barrier. This is a diffusion barrier that prevents the entry of various molecules and particles into the brain parenchyma. However, the filtration process allows some material to pass through so that the brain receives essential nutrients, water, and oxygen, etc.

Once they are secreted, these growth factors are transported to the endothelial cells where they stimulate the cells to form more tight junctions thus causing the barrier to become more selective.

In cases where these astrocytes are damaged, tight junctions decrease which in turn increases the permeability of the blood-brain barrier. This can be a big problem especially when large proteins and toxic/harmful substances are allowed entry and influence unwanted activities in the brain.

Some of the materials that easily diffuse into the extracellular space of the brain through the blood-brain barrier are water, oxygen, and various lipid-soluble substances. Others, like glucose, have to be actively transported through the barrier to gain entry. The barrier allows for the removal of other substances/waste like carbon dioxide.

Ions play a crucial role in the generation of nerve impulses. However, the concentration of ions in the extracellular fluid (outside a neuron) has to be regulated in order for neurons to function properly.

As a result, there is an initial increase in excitability of the neuron which eventually causes decreased excitability and consequently affects neuronal functions. However, neighboring astrocytes can take up excess potassium ions from this environment thus restoring the normal gradient that facilitates the normal movement of ions in and out of neurons.

Commonly known as chemical messengers, neurotransmitters are important molecules that allow neurons to send messages to other neurons or to the muscles. In the central nervous system, Glutamatergic neurons are involved in the production of glutamate (a neurotransmitter) which in turn sends signals between the nerve cells.

Once glutamate is released into the synaptic cleft (the gap between two neurons), it comes in contact with the receptors of the other neuron to influence a response. The glutamate then dissociates from the receptors and is taken up by transport proteins of the former neuron and recycled for re-use.

It's worth noting that the re-uptake proteins can become saturated and thus incapable of taking up all the neurotransmitters in the synaptic cleft. This can be a problem given that any neurotransmitter in the synapse will continue to stimulate and influence the other neuron. To prevent this from happening, the surrounding astrocytes take up these neurotransmitters through specialized transporters.

The neurotransmitter is then converted to another form by the appropriate enzyme (e.g. glutamate is converted to glutamine by the enzyme glutamine synthetase) before it is transported to the neuron to be re-used.

Astrocytes play an important role in regulating the flow of blood in the brain.

An increase in brain activities is accompanied by increased blood flow in what is known as functional hyperemia. This ensures that the brain receives adequate nutrients and oxygen required to support these activities.

Based on a variety of studies, astrocytes have been shown to produce and release various mediators (e.g. prostaglandins and arachidonic acid) that increase or decrease the blood flow through vasodilation or vasoconstriction.

Once stimulated by an increase in calcium ions, astrocytes can secrete arachidonic acid (from the astrocyte endfeet). The metabolite is then used for the synthesis of prostaglandin E2 and epoxyeicosatrienoic acids which serve to dilate blood vessels and increase blood flow to the brain.

The release of potassium from astrocytes has also been shown to promote vasodilation and consequently increase blood flow. In the event of high oxygen supply (hyperoxic conditions), the signaling process can result in the production of  20-hydroxyeicosatetraenoic acid which results in vasoconstriction thereby reducing blood flow to the brain. Therefore, the oxygen level influences the role of astrocytes in blood regulation.

* Here, it's worth keeping in mind that astrocytes are in contact with both blood vessels and neurons through their endfeet. This places them in an ideal position to relay signals from the neurons (e.g. increased release of calcium ions) to the blood vessels (calcium ions in astrocytes eventually result in vasodilation).

Regulation of Glucose and Glycogen Metabolism

Like many other cells, neurons need energy, in the form of ATP, to carry out their functions. In cases where there is reduced/insufficient ATP in neurons, astrocytes can sense this and take up more glucose from the vessels.

In neurons, the lactate is converted to pyruvate which is then used to produce ATP energy. This is an important process that not only supplies lactate when neurons need it but also stores glucose as glycogen to be used when required.

Regulate the Development of Neurons

One way through which astrocytes regulate and support development is by providing structural/physical support (scaffolding). Here, cytoplasmic processes of astrocytes have been shown to provide structural support for developing and differentiating neurons and consequently influencing the brain structure.

Based on several studies, astrocytes have also been shown to play a role in the development of synapses and even influence the synaptic space. This is achieved through the release of factors like thrombospondin. This has a direct impact on how neurons communicate and even regulates how some of these neurons develop.

* Through these activities, astrocytes are also involved in the development of white matter. This is related to their role in facilitating myelination along the axons and maintenance of the myelin.

Role of Astrocytes in Brain Injury

Astrocytes are among early responders to traumatic brain injuries. In the process, they can help in the recovery process and thus maintain normal neural function (or at least prevent further damage) following such events as brain stroke and other mild to moderate tissue damage.

Before discussing how astrocytes respond to neural damage/brain injury, it's worth noting that the survival of neurons is largely dependent on their close interaction with astrocytes. In the event of astrocyte damage, studies have detected failure of neuronal survival and unsuccessful synaptic remodeling.

Therefore, the survival and proper functioning of neurons are heavily dependent on astrocytes.

Some of the strategies through which astrocytes respond to injury or prevent further damage include:

What is the Function and Location of Glial Cells?

Return from "What is the Function of Astrocytes?" to MicroscopeMaster home

Hidenori Tabata. (2015). Diverse subtypes of astrocytes and their development during corticogenesis.