Situated near the nucleus, kinetoplasts are made up of a dense structure consisting of DNA (kDNA) within the mitochondria. As an extranuclear bundle of DNA, kinetoplast are distinguishing features among some eukaryotes that are collectively known as kinetoplastids (members of the order Kinetoplastida).

Based on molecular studies, kinetoplasts have been shown to contain two types of circular DNA. These include:

* kDNA is a large network consisting of thousands of circular, interlocking DNA chains/rings. By Aiox82 - llustration of the location of replication protein complexs for this Wikipedia page, CC BY-SA 3.0, https://en.wikipedia.org/w/index.php?curid=35355765

Kinetoplasts were first identified in the 1960s by scientists like William Trager using the light microscope. At the time, they were described as tiny spherical or rod-shaped structures located behind the basal body of the flagellum.

Using Feulgen stain studies also showed that it contained DNA. Through new studies, the kinetoplast was found to be specifically located within a specialized part of the mitochondrial matrix and perpendicular to the flagellum axis.

Like some of the other organelles, the kinetoplast is self-replicating with its division preceding that of the nucleus. The kDNA of kinetoplastids, which is condensed and organized to form a disc-shaped structure makes up between 5 and 25 percent of the total cell DNA.

For the most part, the network of kinetoplast DNA structure is formed by irregular polygonal structures, while association between this DNA and the membrane of the mitochondrion is through unilateral filaments.

* Here, it's worth noting that at different stages of development (of kinetoplastids); the kinetoplast varies in shape and size. Whereas the kinetoplast has a basket-like shape in trypomastigotes, it gives a rod-shaped appearance in amastigotes and epimastigotes.

* While the position of this structure changes relative to the other organelles during different developmental stages of kinetoplastids, microscopic studies have shown it to remain near the basal body. In amastigotes, the kinetoplast can be seen located anteriorly to the nucleus while it's positioned posterior to the nucleus in trypomastigotes. In both cases, however, it remains near the basal body of the flagellum.

Some of the other characteristics of kinetoplasts include:

As already mentioned, the kinetoplast is composed of two types of DNA rings. In kinetoplastids, both rings of DNA are important and serve different roles that allow the cell to function.

In each network of kinetoplast DNA (kDNA), there are several dozen (20 - 50) maxicircles that vary between 20 and 40 kb depending on the species. In kinetoplasts, maxicircles play an important role in encoding ribosomal RNAs as well as various proteins involved in bioenergetic processes within the mitochondria.

Here, some of the transcripts of RNA may later be modified through the insertion or deletion of uridine residues. This process is regulated by guide RNAs produced by minicircles to form functional open reading frames.

Apart from their role in energy transduction processes, maxicircles are also involved in the formation of some of the proteins that make up the organism.

Within the network (kDNA network), maxicircles are linked to the minicircles in addition to interlocking to other maxicircles.

As compared to maxicircles, a network of kDNA may consist of a few to several thousand minicircles depending on the organism. For instance, whereas the kinetoplast of C. fasciculata contains about 5,000 minicircles, such organisms as T. cruzi may contain tens of thousands of minicircles. These chains of DNA also vary in size from 0.5 to 10kb depending on the species.

* The height of a kinetoplast disk is about half the circumference of a minicircle.

Unlike maxicircles, minicircles are primarily involved in encoding small guide RNAs that are in turn involved in editing. In such kinetoplastids as T. brucei, the RNA transcripts produced by maxicircles contain many editing sites.

For this reason, kinetoplasts contain high amounts of minicircles that produce guide RNAs required for this process (editing maxicircle transcripts). By editing the RNAs, minicircles are involved in the formation of functions mRNAs.

Typically, this results in the formation of an RNA that is different from the encoding DNA. In such kinetoplastids as Trypanosoma, this process occurs when uridine (U) is either inserted or deleted following the transcription process.

Here, the process is regulated by small, overlapping antisense guide RNAs (gRNAs) that attach to the mRNA and act as a template for insertion/deletion of an appropriate number of uridine. Through the process of RNA editing, the pre-RNA (RNA formed during transcription) is transformed into functional mRNA.

* A few of the guide RNAs (gRNAs) are produced by maxicircles.

* Encoding gRNAs is the only currently known function of minicircles.

* 95 percent of the total kDNA mass is composed of minicircles.


Characteristics of minicircles include: 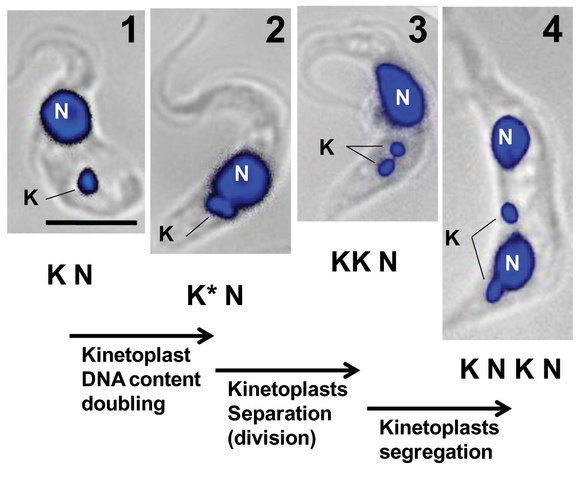 ·       In kinetoplasts, there are two different mechanisms of kDNA replication namely, ring mechanism and the polar mechanism. In both cases, some of the phases/steps of division include: