What is the Phylum Metamonada?

The Phylum Metamonada is a large group comprising anaerobic flagellated protozoa of varying compositions. Initially, they were thought to have been an ancient group due to the absence of proper mitochondria.

Based on a variety of studies, however, they are now understood to have lost their mitochondria over time. While they share a number of similar traits, their relationship is yet to be properly understood. For this reason, taxonomic classification has been revised several times with many differences between published literature.

Some examples of species within this group include:

Infrakingdom: Eozoa - A subkingdom of protozoa that contains Excavata organisms Trichomonas vaginalis by fickleandfreckled, CC BY 2.0

Some of the species in this group include:

Genera Trichomonas and Trichonympha are the most popular groups within the order Trichomonas Trichomonadida. Members of these groups are single-celled organisms characterized by a pear-like shape (trophozoite forms) consisting of a broad, rounded anterior and pointed posterior.

While trophozoites have flagella (located at the anterior part of the cell body), the number varies between different species. Trichomonas species have a total of four flagella measuring about 10 um in length. Trichonympha species, on the other hand, can have hundreds to thousands of flagella originating from the cell body.

Generally, Trichonympha species average about 100 um in length and 20 to 30 um in width. The basal body is characterized by microtubule triplets, a pair of centrioles near the rostrum, as well as parabasal fibers linking the basal body to the Golgi complexes.

Compared to Trichomonas species, Trichonympha species have a pointed anterior and broad, rounded posterior (there are no flagella at the posterior end of the cell body). The cell body of a Trichomonas species (trophozoite) is characterized by the costa (striated fiber), axostyle (microtubule), hydrogenosomes (involved in metabolism), and parabasal filaments.

* Members of the order Trichomonadida do not have mitochondria.

* One of the flagella in Trichomonas runs along the length of the cell body (backward) and forms the undulating membrane. This flagellum enhances motility in some fluids (viscous fluid).

Some of the species in the order Trichomonadida exhibit different shapes and morphologies depending on the stage in their life cycle and the part of the host body they infect. For instance, the species Histomonas meleagridis (infects birds) are normally flagellated trophozoites when they are ingested by birds (e.g. chicken). These forms migrate to the caeca and multiply through longitudinal binary fission before moving to the liver through the caecal mucosa.

In soil or water, some have been shown to go through cyst-like forms that allow them to survive. They are then ingested by worms and invade the host's ova which also allows them to survive in the event they are released into the environment.

The majority of Trichomonadida species are terrestrial and can be found in various hosts as parasites or as symbionts.

The following are some of the species in this group and their respective hosts:

·       Histomonas meleagridis - Parasites of chicken, ducks, and turkeys among other birds

·       Trichomonas tenax - Found in the mouth of human beings

As mentioned, the majority of Metamonads are anaerobic heterotrophs. As such, they obtain nutrition from a variety of organic materials in their respective habitats 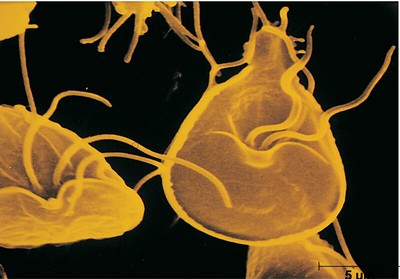 Some of the species in this group include:

The majority of Diplomonads species are small in size measuring about 10 um in length.  They are all single-celled organisms with two identical nuclei that serve the same functions. The nuclei are located beside each other at the anterior part of the cell body and most of the species are bilaterally symmetrical.

Based on microscopic studies, each of the nuclei has been shown to be associated with the flagellar apparatus from which the flagella originate. Apart from the flagella, there are a series of microtubular roots that permeate the cytoplasm.

* Like most Trichomonadida species, most diplomonads are pear-shaped with a broad, rounded anterior and pointed posterior.

Some of the other parts of the cell body include:

Cyst - Some Diplomonads produce cysts at one stage of their life cycle. Giardia lamblia, for instance, produce cysts that measure between 8 and 12 um in length and 7 to 10 um in width. They contain four nuclei and a dense wall that allows the cyst to survive harsh environmental conditions. Some of the other contents of the cysts include dense cytoplasm, glycogen granules, as well as peripheral tubules.

Life Cycle - In Giardia species like Giardia duodenalis, the life cycle involves trophozoite and cyst stages. Cyst forms can be found in water bodies, soil, and the surface of various substrates (food). Once they are swallowed, they move through the esophagus and reach the small intestine where excystation produces two similar trophozoites.

In the small intestine, these trophozoites obtain available nutrition which provides them with the energy required for multiplication through longitudinal binary fission. When they move to the colon, encystation occurs which prepares them for harsh environmental conditions when once they are released into the environment. If they are released into food material or drinking water, they can cause an infection when ingested and the cycle repeats itself.

Habitat - Diplomonads can be found in different environments around the world. As mentioned, Giardia species can be found in aquatic and terrestrial habitats as cysts. This allows them to survive unfavorable conditions for an extended period of time. However, trophoizoites can be found in the body of the host (human and other animals). However, the majority of species are parasitic and therefore rely on their respective hosts for survival.

Oxymonads (Oxymonadida species) in phylum Metamonada can be found in association with a variety of hosts.

Some species that belong to this group include:

In trophozoites, the flagella (four in most species) are associated with the nucleus. The flagella are also connected and appear to originate from the preaxostyle which is a sheet-like microtubular root. The axostyle also originates from the preaxostyle and runs down along the length of the cell body. This (axostyle) consists of an array of connected microtubules and resembles axostyle found in parabasalid species.

In some Oxymondas, the structure has been shown to be highly motile. This is made possible by the sliding action of the microtubules.

* Some Oxymonads may have eight flagella.

* Some rare species have numerous nuclei. These nuclei are also in association with the flagella.

Some of the other organelles found in Oxymonad cells include:

Cysts - A few species (E.g. some Monocercomonoides species) have been shown to form cysts. Generally, the cysts are round and have a thin wall. Like the trophoizoites, they are also uninucleated and thus have a single nucleus.

Reproduction and life cycle - As mentioned, some Oxymonads produce cysts and therefore have cyst and trophozoite stages. On the other hand, some species have been shown to produce sexually or at least have a sexual stage in their life cycle.

Among Saccinobaculus and Oxymonas species, the reproduction may involve the fusion of gametes. This fusion (autogamy) is followed by a single phase of meiosis that gives rise to two daughter cells that can develop and repeat the cycle. In Pyrsonympha, reproduction involves a ploidy cycle. Here, meiotic divisions reduce the high ploidy followed by a series of DNA replication that restores the high ploidy.

Habitats - For the most part, Oxymonads are obligate symbionts that can be found in the gut of wood-eating roaches and termites. Here, they help in the digestion of wood material and benefit from a conducive environment for growth.

Some species in this group include:

Like many other Metamonada, Trimastix species are single-celled organisms that move by means of four flagella (they are quadriflagellate). They display some differences in shape, ranging from pear-shaped and rounded to bottle-shaped and elongated. However, they all appear to have a convex dorsal surface with a planar ventral surface.

At the ventral surface, Trimastix species have a conspicuous groove (a ventral groove) used for feeding. The groove is significantly large and extends about two-thirds of the cell body's length. The four flagella appear to originate from the anterior portion of the groove below the apex of the cell.

Depending on the species, one of the flagella may appear longer than the others. Another flagellum runs along the length of the cell body and extends to the posterior part of the cell. In some species, this flagellum is characterized by two vanes at the free posterior end.

* Most of the cells in the order Trimastigida range between 11 and 17 um in length and 7 to 13 um in diameter.

Trimastix species have a single nucleus located at the anterior part of the cell. The nucleus has a more rounded shape and is surrounded by a network of rough E.R (endoplasmic reticulum). Apart from the endoplasmic reticulum, a Golgi body/stack (dictyosome) can be seen at the posterior portion of the cell body left of the basal body.

Like many other members of the phylum Metamonada, these species lack mitochondria and contractile vacuole. However, they possess hydrogenosomes that range between 0.5 and 1.0 um in length.

Some of the other structures that can be identified under the microscope include:

Cytoskeletal microtubules - They originate from the anterior part of the cell

Cyst - Some Trimastrix form cysts at a certain stage of their life cycle. The cyst is generally rounded/spherical in shape and has a thin outer wall. The basal body, flagella and other cell components are contained within this wall until conditions improve and trigger excystation.

Habitat - Most species are free-living organisms and can be found in anoxic freshwater environments. Here, they use flagella for motility and feed on bacteria (they are bacterivorous). Captured bacteria are ingested at the posterior end of the ventral groove and end up in the food vacuoles. These vacuoles are at the posterior portion of the cell.

The word "Monas" is derived from the Greek word meaning oneness. While Metamonada species display various differences in their shape, morphology, and life cycle, they also share a number of similarities that allow them to be grouped together. For instance, in general, they are all flagellate, single-celled organisms capable of motility.

* Species with 6 or more flagella are referred to as polymonad.

As mentioned, most of the species are parabasalids and thus have parabasal bodies. These bodies consist of fibers and associated Golgi dicytosomes involved in the production and transportation of proteins.

Like bacteria, Metamonada were thought to have been an ancient/primitive group of organisms because they lacked mitochondria. However, studies would reveal remnants (hydrogenosomes) of this organelle in their cells showing that the organelle was originally present but lost over time.

In some literature, the phylum is divided into two major subdivisions/subphyla that include Anaeromadea and Trichozoa. The subphylum Anaeromadea consists of species found in anaerobic habitats. These species are characterized by four cilia arranged in pairs of two. Some of the species in this group include members of the genera Trimastix and Oxymonads. Trichozoa, on the other hand, consists of several superclasses with symbiotic and parasitic members.

Apart from their association with various insects, some of these protozoa are also associated with some bacteria that aid in the digestion of cellulose to release sugars that are used by all three organisms (insect, protozoa, and bacteria). Parasitic species cause a number of diseases and health problems in different hosts.

·       Tritrichomonas foetus - Can cause diarrhea in cats

What does phylum mean in Biology?