Despite their differences, nucleases have a number of important functions that include: 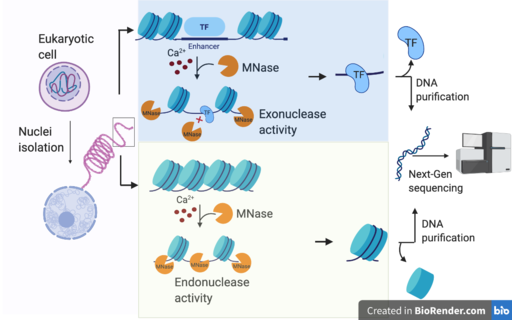 As mentioned, endonucleases are the type of nucleases involved in the cleavage of phosphodiester bonds within the nucleic acid chain (polynucleotide chain). While some of these enzymes only cut/cleave at specific sites (commonly known as restriction endonucleases), others can cut at any given site within the strand.

One of the other defining characteristics of endonucleases is the fact that they can cut both double-stranded and single stranded nucleic acids. This is different from exonucleases which can only cut a single strand of the molecule.

Endonucleases are often divided into two main groups that include:

A good example of a structure/sequence-independent endonuclease is Escherichia coli endonuclease I (Endo1). As the name suggests, these endonucleases tend to randomly cleave the DNA strand (within the DNA structure). This is because they do not depend on a specific sequence or structure of the strand in order to cut.

These enzymes are primarily involved in cleaning up DNA contaminations. Because of the nature of their action, they are commonly referred to as possessive enzymes. As such, they continue to cleave DNA once the action has been initiated.

Unlike structure-independent endonucleases, structure-dependent endonucleases require a specific site or damaged base in order to act. A good example of such sites is the apurinic site (apyrimidinic site) also known as AP sites. These sites occur spontaneously when a given base pair is lost and can negatively affect the cell's functions.

In such an event, the enzyme endonuclease IV jumps into action to catalyze the cleavage of the phosphodiester bonds at the site to create a 1 nucleotide gap (this cap consists of a 3' hydroxyl and 5' deoxyribose phosphate terminal). 8-oxoguanine (8-oxoG) is also an example of DNA error. This type of error in the DNA occurs when guanine is oxidized.

This error is eliminated by the enzyme Fpg. When activated, the enzyme serves to remove the damaged purines (2-6-diamino-4-hydroxy-5-formamidopyrimidine and 8-oxo-7, 8-dihydroguanine). This action creates a 1 nucleotide gap with 5' and 3' phosphate terminals.

Some of the other types of endonucleases include:

These sites are commonly known as restriction sites and consist of a short sequence of nucleotides. In most cases, the restriction sites read the same forward and backward (e.g. GTAATG) and are therefore known as palindromes/inverted repeats.

There are four main types of restriction enzymes/endonucleases which include:

Some examples of Type II enzymes include Type IIS, Type IIG, and NotI.

Type III restriction enzymes - Type III enzymes normally cleave at sites between 20 and 30 pairs away from the recognition site. Like type I enzymes, they require ATP and S-adenosyl-L-methionine to function and consist of several subunits. As compared to some of the other enzymes, type III enzymes can recognize two non-palindromic and inversely oriented sequences.

* Being some of the most common endonucleases, restriction enzymes are often used in gene cloning and protein expression, DNA mapping, and preparing DNA libraries.

As mentioned both in DNA repair and restriction digestion, the enzymes start by recognizing the restriction site. These sites consist of a specific sequence of nucleotides - 4-5 bases. Following recognition, the site is then acted upon/cleaved. This is often uneven and involves acting on the phosphodiester bonds. Eventually, this action generates sticky or blunt ends which can then be reconnected through hybridization (through the action of DNA ligase)

* The different types of endonucleases recognize and act on specific sites. Exonucleases are nucleases that act by cutting/removing nucleotides from the ends of nucleic acid strands. There are many different types of exonucleases with different structural and biochemical characteristics. Like endonucleases, they are involved in a number of important functions including maintenance of genomic DNA integrity, DNA repair, degradation and turnover of RNA, regulating transcription, and enhancing the fidelity of DNA synthesis.

Depending on the type of exonuclease, they can remove nucleotides from the 5' to 3 direction of 3' to 5' direction (from ends of both single-stranded and double-stranded DNA strands).

For instance, the majority of exonucleases will digest DNA with nicks. Essentially, a nick is a notch/dent commonly found in double-stranded DNA molecules. These notches are often the result of lost phosphodiester bonds between neighboring nucleotides. Unlike endonucleases, this takes place at the ends of the strand. With the exception of Axo V and Exo VIII, the majority of exonucleases can digest DNA molecules with nicks.

Some of the other exonucleases that act by removing one base at a time are Exonuclease I and Exonuclease III (of E.coli). Unlike the Lambda Exonuclease, the two enzymes start acting at the 3' end of the strand.

Some of the other mechanisms of other types of exonucleases include:

Removing short oligos - Also known as oligonucleotides, oligos are short strands of DNA or RNA. Some of the exonucleases involved in the removal of these oligos include Exonuclease V, Exonuclease VII, and T5 Exonuclease. Whereas the T5 Exonuclease starts from the 5' end to the 3' end, the other two can start from any direction.

As well, Exonuclease V can digest both single-stranded and double-stranded DNA molecules.

* Compared to some of the other exonucleases, the enzyme Exonuclease V is unique in that it consists of helicase and endonuclease. It's involved in a number of functions including unwinding a double-stranded DNA molecule and DNA digestion.

Both endonucleases and exonucleases are nucleases whose primary function is to cleave nucleic acid strands (DNA/RNA). They can be found in eukaryotic and prokaryotic cells (E.g. E. coli) and achieve their function by cutting the phosphodiester bonds that hold adjacent nucleotides together.

However, they have several differences that include:

Here, exonucleases usually need the 5' or 3' (phosphate and hydroxyl groups respectively) end in order to act on the strand. Depending on the enzymes, the activity of endonuclease enzymes can result in blunt or sticky ends. However, exonuclease activities often produce sticky ends.

In order to perform their function, these enzymes have to identify these sites (e.g. apurinic site) on the DNA strand. If the site is not detected, then the enzyme cannot act. As well, exonucleases are random (non-specific) in their activity. Here, then, their functions depend on the type of action required at any given time (e.g. degradation of RNA).

·       5' to 3' exonucleases - These exonucleases act from the 5' to 3' direction. Essentially, this means that they recognize the phosphate group (at the 5' end) before starting their activity.

·       3' to 5' exonucleases - These exonucleases act from the 3' to the 5' direction. As such, they first identify the hydroxyl group in the nucleic strand.

Defensive functions - In bacteria, as mentioned, restriction enzymes can identify and destroy viral DNA by cleaving them. This is an important defensive strategy that prevents viral particles from proliferating (prevent viral DNA from being replicated). Unlike endonucleases, exonucleases do not have this particular function.

Tatsuya Nishino and Kosuke Morikawa. (2002). Structure and function of nucleases in DNA repair: shape, grip and blade of the DNA scissors.