What are the Functions of Lipids, Proteins, and Lipopolysaccharides on the Cell Membrane?

While it's commonly referred to as a phospholipid bilayer structure, the cell membrane also consists of several other components including proteins and carbohydrate groups. Functions of Lipids in the Cell Membrane

Here, however, it's worth noting that the structure consists of three main types of lipids.

While the phosphate group and glycerol molecule make up the head region of the phospholipid, the fatty acid chains are commonly referred to as the tails. * The double bond in the unsaturated fatty acid chain caused the chain to bend (with a kink). This causes the chain to push the adjacent phospholipid thus creating a little distance between phospholipid molecules. In doing so, the kinks contribute to the overall fluidity of the membrane.

* In water, the phosphate group has a negative charge (because it donated hydrogen ions) which causes the phospholipid head to become hydrophilic.

Compared to the phosphate group, the fatty acids of the molecule do not have any charge and are also non-polar. For this reason, they are hydrophobic and thus repel water molecules.

As mentioned, the phosphate group of the molecule is hydrophilic and therefore attracts water molecules. As well, the fatty acid tails which are hydrophobic in nature repel water molecules and will therefore face away from the water.

Diagrammatic representation of a section of the phospholipid bilayer. Credit: MicroscopeMaster.com

The phospholipid is a crucial part of the membrane because it makes up the main barrier between the inner and outer regions of the cell.

Because the hydrophobic tails are never exposed to the aqueous environment (which contains water among other substances), the structure is kept stable. This is especially important given that it helps maintain the general structure/shape of the cell.

The other important function of phospholipids is that they help regulate the movement of substances in and out of the cell. As already mentioned, phospholipids build the phospholipid bilayer which is the main barrier between the inner and outer environment of the cell.

As such, they also help control the type of substances that move in or out of the cell. In particular, this membrane plays an important role in the diffusion of small molecules (e.g., gases like carbon dioxide and small uncharged molecules) in an out of the cell.

Because they are very small, hydrophobic (e.g., benzene), or uncharged (e.g., ethanol, etc.), these molecules easily diffuse through the hydrophobic region and move into the cell or out of the cell depending on the concentration gradient. In the process, the phospholipids also play an important role in maintaining homeostasis.

For this reason, the layer acts as an electrical insulator, keeping the right charge inside and outside the membrane. In the neurons, in particular, this function of the lipids helps propagate the proper speed of signals in the form of ions along the axons.

Cholesterol, a type of sterol, is also a membrane lipid that makes up between 25 and 30 percent of the total lipids in the cell membrane.

Like the phospholipid molecules, a cholesterol molecule also consists of a hydrophilic region (a polar head) and a hydrophobic chain (alkyl chain). A diagrammatic representation of cholesterol molecules within a section of the cell membrane. Credit: MicroscopeMaster.com

In the cell membrane, cholesterol has a number of important functions that include:

In the cell membrane, cholesterol has also been shown to contribute to the flexibility of the structure. In the absence of cholesterol, studies have shown that the phospholipid molecules can get much closer together, especially in the cold, which significantly reduces its flexibility. This can affect the fluidity of the cell membrane and the ability of some substances to pass through.

Based on research studies, cholesterol molecules in the membrane have been shown to change position and move to a given region through a process known as a flip-flop. This allows them to contribute to the flexibility of cells especially when they change shape.

A good example of this is when neutrophils squeeze between cells of the blood vessels (capillaries) in order to leave circulation and reach an infected site. Diagrammatic representation of the flip-flop movement of cholesterol. Credit: MicroscopeMaster.com

(a)   Cholesterol molecules are evenly distributed in the membrane

As well, intercalation of these molecules (cholesterol) between the phospholipids during low temperatures prevents the membrane from becoming very stiff which would otherwise affect how the cell functions. Therefore, the presence of cholesterol plays an important role in promoting the stability of the membrane.

As the name suggests, glycolipids are the type of lipids that contain carbohydrate molecules. Here, a monosaccharide or oligosaccharide molecule is bound to the lipid through covalent bonds.

Compared to the other lipids, glycolipids are only found in the outer membrane (non-cytosolic side of the membrane). They can be found on the cell membrane of all eukaryotes and make up about 5 percent of the total lipids in the membrane.

* Like the other lipids, glycolipids are also amphiphilic molecules. As such, they consist of a hydrophilic region (the sugar group) as well as a hydrophobic region (the lipid moiety which is attached to the cell membrane)

On the cell membrane, glycolipids have a number of functions that include:

They act as surface receptors -  Glycolipids on the surface of multicellular eukaryotic hosts act as receptors for various pathogenic bacteria. Here, the pathogen (or toxins) attaches to the host cell by binding to the receptor which in turn allows them to gradually invade the cell.

Signal transducers - Also known as cell signaling, signal transduction refers to the process through which molecular signals are transmitted from the exterior of a cell to the interior part of the cell.

During signaling, Glycosphingolipid, which is a type of glycolipid, associates with like molecules GPI-anchored proteins and growth factor receptors. A signal is then transmitted allowing the cell to respond effectively. This has also been shown to play an important role in cell proliferation.

Biosurfactant and in homeostasis - Essentially, biosurfactants are compounds with the capacity to reduce surface tension and interfacial tensions between surface molecules.

Because of their amphiphilic nature, glycolipids (e.g., Mannosylethritol lipids), produced by microorganisms like Candida antarctica act as biosurfactants.

Here, they have been shown to significantly reduce the antimicrobial activity of some of the agents used against them. As well, glycolipids like gangliosides which have a high affinity for calcium play an important role in synaptic transmission.

Functions of Proteins in the Cell Membrane

Membrane proteins are divided into two main categories that include: 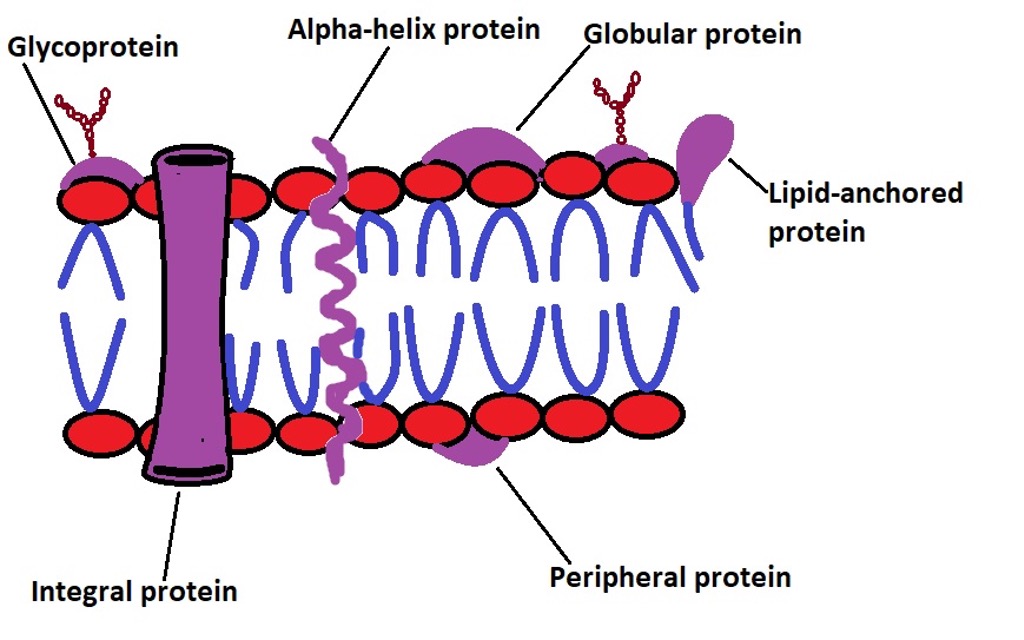 Diagrammatic representation of proteins in the cell membrane. Credit: MicroscopeMaster.com

One of the main functions of membrane proteins is the transportation of substances in and out of the cell.

In particular, these proteins are involved in two main types of transport that include:

This type of transport serves to move different types of substances including ions, amino acids, carbohydrates, and glycosylamines among others. These substances may be charged, too large, or polar and thus incapable of diffusing through the phospholipid bilayer.

There are several types of primary active transport that include:

Uniporter (e.g., glucose transporter) - Only move a given type of substances in a single direction

Here, one of the best examples of this type of transportation is the transport of glucose through the symporter involved in the movement of sodium ions down the electrochemical gradient.

In this case, the energy produced as the ions are transported down the electrochemical gradient makes it possible for glucose to be transported through the symporter.

These junctions are divided into three main categories that include:

Occluding junctions (tight junctions) - Tight junctions are protein complexes commonly found in epithelial tissue. Here, they connect cells together in a manner that prevents small molecules on one side of the epithelial sheet from leaking to the other side. They have been shown to contain more than 40 types of proteins (both cytoplasmic and transmembrane proteins).

Here, some of the transmembrane proteins that make up these junctions include claudins, occludin, and JAM proteins (junction adhesion molecule proteins). While tight junctions play an important role in creating a barrier between tissue spaces, they also control the movement of substances across the epithelium.

Communicating junctions (gap junctions)  - As the name suggests, gap junctions are involved in communication, through the diffusion of ions and some molecules, between neighboring cells.

They primarily consist of integral membrane proteins known as connexins (connexin-associated proteins). Cell-to-cell communication established by gap junctions is crucial for a variety of activities including metabolic exchange in tissues as well as cell proliferation.

These junctions have been divided into four main groups that include:

Adherens junctions - Involved in a number of functions including stabilizing adhesion between cells, regulating actin cytoskeleton, as well as regulating the signaling process between cells: These junctions are primarily composed of transmembrane proteins known as cadherins

Desmosomes - Desmosomes link neighboring cells and play a role in promoting the mechanical integrity of various tissues. By supporting the connection between cells in tissues, they have also been shown to promote morphogenesis.

The other important functions of membrane proteins include:

As enzymes - A number of proteins (e.g., Aminopeptidases) are located in the membrane where they are involved in various metabolic pathways

Functions of Lipopolysaccharides (endotoxins) in the Cell Membrane

Found in the outer membrane of Gram-negative bacteria, lipopolysaccharides are large glycolipids that consist of lipids covalently attached to long chains of sugar moieties known as oligosaccharides.

Overall, these large molecules (lipopolysaccharides) consist of three main parts which include lipid A which is the hydrophobic part of the molecule which is attached to the outer layer of the outer membrane, the core oligosaccharide (hydrophilic region connected to Lipid A), and the O antigen which is a repetitive glycan polymer.

* Some Gram-negative bacteria do not have lipopolysaccharides.

Protection - One of the functions of lipopolysaccharides is that they help protect the bacterial cell from substances like bile salts and some antibiotics (lipophilic antibiotics).

Here, studies have suggested that in some Gram-negative bacteria, lipopolysaccharides are modified allowing the organisms to evade the actions of bile salts and some antibiotics used against them.

Pathogenicity - Following an infection, lipopolysaccharides (and specifically Lipid A) has been shown to activate the immune system. The toxic effect of the molecule is characterized by fever and even septic shock in some cases. In severe cases, this may result in organ failure and even death.

Stability - By increasing the negative charge of the membrane, lipopolysaccharides have been suggested to contribute to the stability of the membrane.

Return to learning about the Cell Membrane

Return to Different Cell Organelles and their Functions

Return from What are the Functions of Lipids, Proteins and Lipopolysaccharides on the cell membrane? to MicroscopeMaster home