Definition: What is Listeria?

Discovered in 1927 by E.G.D. Murray and J. Pirie (they discovered Listeria monocytogenes as the causative agent of human listeriosis), the genus Listeria is a Gram-positive bacteria that consists of 17 rod-shaped species (short rods). They are widely distributed in nature and can be found in different habitats that contain foods, soil, or silage, etc. While the majority of species are free-living organisms, capable of surviving on decomposing plant material, a few are pathogenic and capable of causing disease outbreaks in human beings which can be fatal.

In the United States, for instance, Listeria monocytogenes is estimated to cause about 1600 illnesses annually with over 250 related deaths. The few species that have been identified so far are further divided into several strains which are stereotypes on the basis of cellular and flagellar antigens.

* The genus Listeria was named after Sir Joseph Lister, a British surgeon who pioneered antiseptic surgery. This was proposed by J. Pirie.

Some of the most common species in the genus Listeria include:

Domain: Bacteria - As a group under the domain Bacteria, Listeria consists of prokaryotic single-celled organisms. As such, they have a simple cell structure lacking membrane-bound organelles. Regardless, they are ubiquitous in nature and can, therefore, be found in various habitats across the world. In the domain, Listeria also fall under the kingdom Eubacteria which consists of true bacteria.

Phylum: Firmicutes - The majority of this species in this Phylum are Gram-positive bacteria. However, a few species lack a cell wall and do not stain Gram-positive. Many of the species are also characterized by a low G+C content with their DNA have fewer G and C bases compared to many other organisms.

Class: Bacilli - Members of the class bacilli are Gram-positive bacteria characterized by a rod-shaped appearance.

Family: Listeriaceae - Members of the family Listeriaceae are Gram-positive bacteria. They exist as either aerobic or facultative anaerobes and are characterized by short rod-like bodies capable of forming filaments (Species that produce filaments use them for movement)

Order: Bacillales - Bacillales are Gram-positive bacteria. They are characterized by their ability to produce antimicrobial compounds.

Genus: Listeria - Characteristics of this genus are discussed below.

Ecology and Distribution of Listeria Bacteria

Currently, only 17 species of the genus Listeria have been identified. Depending on the species, they can be found in areas/regions with low temperature (cold environments) or in regions with moderate temperature ranges.

They can be classified as either mesophilic (species that thrive in moderate temperatures) or as psychrotrophic (those that live in cold environments). However, they are ubiquitous in nature and can be found in a variety of habitats including soil, silage, aquatic environments, and sewage material among others. In these habitats, they survive as free-living organisms where they exist as saprophytes.

Pathogenic species, on the other hand, can be found in a variety of hosts including human beings, domestic mammals, fish, insects, as well as a number of avian species. In these hosts, they are commonly found in the intestinal tract where they can exist without causing any symptoms.

* Some of the species can be found in both moderate temperature regions and cold environments where they are capable of tolerating high salt concentration and a broad range of pH.

* While Listeria species can be found in diverse habitats, their preferred habitat/niche has not yet been identified.

* Listeria bacteria are facultative anaerobes. However, they have been shown to survive in the presence of oxygen.

* Listeria bacteria can survive and even reproduce in the temperature range between 4 and 42 degrees C. For this reason, refrigerating food products does not stop growth completely.

* Reproduction and proliferation is through the L-forms that reproduce by pearling. Here, extracellular vesicles are produced and remain linked to the parent cell by elastic membranous tubes. 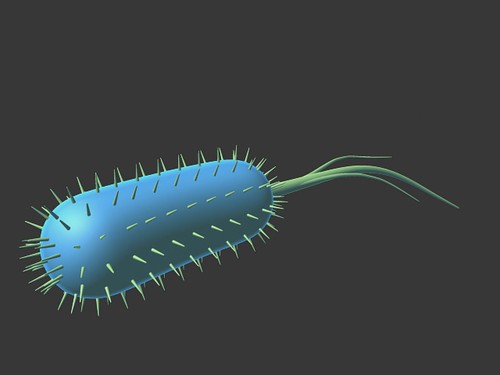 Generally, Listeria bacteria are short rods with rounded ends. For this reason, they are also classified as coccibacillus bacteria. Depending on the species, they vary in size from 0.4 to 0.5mm in thickness to 0.5 to 2.0mm in length.

Like many other cells, Listeria species have a membrane surrounding the cell contents. In Listeria monocytogenes, this membrane is about 90 Angstrom (Å) in thickness. It's composed of between 55 and 60 percent protein and 30 to 35 percent lipid (making about 80 percent of the phospholipids). It also consists of such carbohydrates as glucose, ribose, or arabinose which may range between 1.3 to 2.3 percent.

* The fatty acid in the membrane of Listeria monocytogenes is highly branched.

In the cell wall, these components serve a number of important functions that allow the cell to function properly. For instance, they play an important role in anchoring surface proteins, the transportation of ions and nutrients as well as cation homeostasis.

* Teichoic acids (TAs) are electronegative polymers consisting of d-Ala residues and diverse sugars. However, these contents vary from one serotype of the Listeria monocytogenes to another. In serovar 1/2a, for instance, ribitol is substituted for GlcNAc and rhamnose. However, in serovar 4, the polymers consist of GlcNAc (which itself contains galactose and glucose) which is one of the central components of its chains.

* Lipoteichoic Acids consists of galactose, lipid residues as well as Ala. Here, the glycerophosphate chain is anchored to regions of the plasma membrane by a lipid anchor.

Unlike many other Gram-positive bacteria, the peptidoglycan of these bacteria has been shown to resemble that found in such species as E. coli. As such, it consists of alternating units of disaccharide N-acetylmuramic acid (MurNAc)-(β-1,4)-N-acetylglucosamine which are cross-linked by peptidic bridges.

While some of the Listeria species have flagella, they are not always used for motility given that motility can be affected by varying temperatures. In Listeria monocytogenes, for instance, motility genes have been shown to be down-regulated at 37 degrees C. However, they are active at about 30 degrees C and allow the organism to move around in their habitats.

Apart from motility, the bacteria also use these structures (which may range from 4 to 6 in number) for attachment, which is particularly important for pathogenesis. In some cases, Listeria also produces actin filaments that allow them to spread from one cell to another. These are therefore useful for movement and attachment.

With the exception of L. monocytogenes and  L. ivanovii which cause infections in human beings and a number of other animals, a good number of Listeria species exist as free-living organisms and can be found in soil and other waste material where they live as saprophytes.

Here, Listeria breaks down various complex substances as a source of nutrition. As such, they play an important role of decomposing organic matter, which is important in agriculture.

In human beings and other susceptible animals, the pathogen can gain entry into intestinal mucosa by invading the cells (enterocytes) that line absorptive epithelium. Apart from causing infections in this region, the pathogen is capable of crossing several barriers (intestinal, placental, and blood-brain barriers) to reach and infect other parts of the body.

As intracellular pathogens, Listeria has to invade epithelial cells in order to access the nutrient-rich cytosol. This is achieved through the use of bacterial surface proteins (e.g. InIA or InIB) that bind to the cell receptors in order to initiate adhesion and consequently the entry process (This is enhanced by the release of hemolysin and phospholipases by the pathogen into the cell).

Here, however, Listeria bacteria have been shown to avoid phagocytic cells given that they can easily be engulfed and destroyed. Within the infected epithelial cells, Listeria bacteria multiply and invade new cells. This allows them to pass through various barriers and infect other body tissues.

* Within the cytoplasm of infected cells, Listeria polymerizes cytoskeleton actins of the host cell and uses it to move around in the cell. Using the actin, the bacteria attach to the cell envelope of the host where it produces ActA, bacterial surface protein. In response to these activities, the extrusions are produced by the cell membrane of the host and penetrate the neighboring cells.

Rather than expelling the pathogen from the cell, this creates a bridge between the infected cell and neighboring cells allowing the bacteria to invade new cells. This means of spreading from one cell to another is particularly beneficial for Listeria given that it allows them to avoid defense mechanisms of the cell. Listeria species are cultured in blood culture in order to enhance the recovery of isolates. Here, the culture media may include 5 percent blood agar and BHI broth.

The sample (e.g. cerebrospinal fluid) is incubated at 37 degrees C for between 1 and 2 days. If the bacteria is present in the sample, it appears as white patches/spots in the media.

* Although the bacteria may take up the primary stain and appear violet under the microscope, various experiments have shown that they may not take up the stain which may cause them to appear Gram-negative. For this reason, other biochemical tests have to be used to confirm the presence of the bacteria in a sample.