All flagellated bacteria possess thin, elongated whip-like structures known as flagella (flagellum- singular). Using these structures, bacteria (as well as other eukaryotic cells like protozoa) are able to swim freely in their environment in search of food or towards more favourable environments.

Helicobacter pylori, a member of Helicobacter is a good example of flagellated bacteria. Using the flagella, the bacteria is capable of moving and colonizing the gastroduodenal mucosa in human beings where it causes gastrointestinal disease.

H. pylori has a spiral shape that resembles a corkscrew. They also have branched/threads of between 5 and 7 flagella attached to one end of the bacteria (on one polar end). This shape (spiral or s shaped) is similar to many of other bacteria classified as helicobacter and has been shown to play an important role in helping bacteria move easily in their environment.

Within the gastric mucosa, viscosity is high, which may cause motility problems for an organism. However, using a tuft of 5 to 7 flagella and taking advantage of its shape, H. Pylori is able to rapidly move from one location to another.

* Being a bacterium, H. Pylori contains nucleoid material and ribosome in their cytoplasm that are not contained within a membrane (characteristic of prokaryotes). The cell also has two membranes (inner and outer) that are separated by a periplasm (a gel-like matrix)

* While more powerful microscopes are used to study the structure of the bacteria, phase-contrast microscope and confocal microscope can help reveal the general morphology of H. pylori.

Structure of the Flagella

All helicobacter use flagella as a means of moving from one location to another in their environment. The flagella is covered in a sheath that protects their cells and structures. Apart from the sheath, the flagella are composed of several parts that allow them to work effectively.

* Flagella act like propellers. As such, they rotate counter clockwise to propel the bacteria in a given direction.

When conditions change and become detrimental, H. pylori have been shown to change their shape from spiral to spherical (coccoid).

According to a number of studies, the bacteria could not be cultured once it transformed (to coccoid) and would not revert to their normal shape when they were put in favorable conditions.

On the other hand, they have been shown to transform into a coccoid shape as they age which shows that the transformation does not only serve to protect the organisms.

See page on Cilia and Flagella

Helicobacter pylori was first discovered and isolated in the gastric mucus layer in the late 1970s and early 1980s by Barry J. Marshall and J. Robin Warren.

This, as well as various other organisms observed in the gastrointestinal system helped usher in a new era in gastric microbiology and medical care. While other species belonging to the Genus Helicobacter live in the gastric mucosa of such animals as dogs and mice, studies have shown H. Pylori to prefer the gastric antrum in human beings.

In histological examinations conducted in 1979, Warren noticed that H. Pylori were present in the mucus layer overlying the tissue rather that inhabiting the gastric mucosa. In healthy human beings with a normal functioning gastrointestinal tract, H. pylori are restricted to this part of the body (gastric antral surface) where they live and survive without causing significant harm to the host.

* Flagella used for swimming and the ability to secrete urease enzyme makes it possible for the bacterial to survive in the antral surface. Survival in the Gastric Antral Surface

Because of the acidic nature of the stomach (due to the production of hydrochloric acid), it was widely believed that no microorganism could survive in this environment.

This changed with the discovery of spiral organisms in the gastric mucus layer. According to further studies, it became evident that like various other organisms, H. Pylori possessed unipolar flagella that made it possible for the bacteria to swim rapidly through the viscous mucus. This characteristic allows the organism to move from one location to another within the gastric antrum and to more favorable areas when required.

In addition to possessing flagella for motion, H. pylori were also found to be capable of secreting large amounts of enzyme urease. Using this enzyme, the bacteria can effectively breakdown endogenous urea to ammonia (as well as bicarbonate which is a base) thus creating favorable conditions for survival. By converting urea to ammonia, H. pylori causes the pH level in its environment to rise (to higher pH) thus protecting the bacteria from the acidic nature of the stomach environment.

Apart from producing ammonia which increases the pH level around the bacteria, the enzyme has also been shown to have toxic effects on the cells of gastric epithelia. As such, it contributes to the infection and thus stimulates an immune response.

To survive the conditions of the gastrointestinal tract, H. pylori also produce a number of other products that either protect the bacteria from phagocytes or degrade other components in their environment. For instance, the bacteria can secrete superoxide dismutase that protects it from the actions of phagocytes which consume and kill invading microorganisms.

Also, such enzymes as Glycosulfatase are used for the purposes of breaking down and degrading such compounds as mucin and other components in their surrounding area. By using such adhesins as BabA, H. pylori are able to adhere and thus remain attached to the gastric surface (gastric epithelial cells). This can stimulate the production of immune cells (cytokines) to the site resulting in the destruction and death of the epithelial cells.

In some cases, the bacteria has been shown to live in epithelial cells (through endocytoses) making it difficult to completely eradicate the bacteria in some patients.

For different strains of the bacteria, there are varying virulence factors. For instance, among some of the strains, studies have associated the presence of cytotoxin-associated gene A (CagA) with high production of proinflammatory cytokins in the gastric mucosa.

Its presence has been linked to high risks of peptic ulcer disease as well as gastric cancer. About half of the strains have been shown to be capable of producing a cytotoxin that is capable of causing vacuolation and death of epithelial cell and thus enhancing infection of the gastric mucosa.

This varies from one country to another and between young people and adults. For instance, rates of infection have been shown to be high in developing countries compared to developed nations.

* H. pylori infects about half of the world’s population.

* They can be invasive and live as intercellular facultative organisms (organisms that can switch to anaerobic respiration in the absence of oxygen).

H. Pylori reproduces and multiplies through binary fission as is the case with most bacteria. During binary fission, bacterial chromosomes replicate as the cell enlarges. This is then followed by division of the chromosome and formation of a septum that ultimately divides the cell into two.

The two halves of the chromosome ultimately separate and as the cell divides into two it allows each daughter cell to remain with chromosomes and other cell components (cytoplasm, ribosome etc). This process creates two daughter cells.

* During binary fission, enzyme helicase breaks the bonds that hold the nucleotide bases together in order to unzip the molecule. Other proteins, such as DNA polymerase, then play an important role of adding new nucleotides in order to build a double stranded DNA molecule for each of the daughter cells.

By ingesting contaminated food or water etc, the bacteria may enter human beings (fecal-oral route) allowing them to pass down the esophagus to the gastric mucosa where the life cycle continues. Through this mode of reproduction and life cycle, the bacteria can continue to thrive as it spreads from one host to another.

* Oral-oral transmission has also been identified in some cases. A good example of this is with women in developing and third world countries who premasticate food given to babies.

Apart from human beings, studies have not identified any other substantial reservoir of H. pylori. This has led to the conclusion that human beings are the primary and ideal host for the bacteria. In other animals (dogs etc), organisms that have been identified only resemble H. pylori and are thus known to cause non-H. Pylori infections.

Although H. pylori has been shown to infect over about 50 percent of the world's population, a majority of those infected do not suffer symptoms associated with the infection. However, in other cases, the bacteria has been associated with infections that require treatment.

As the H. pylori produces enzymes and other products to protect itself from the conditions of its environment, it affects the protective mucus in this the gastric region. This makes it easy for the acid to come into contact with the sensitive lining and cause irritation.

Some of the symptoms associated with peptic ulcers include:

* H. pylori is responsible for 70 to 80 percent of gastric ulcers as well as 90 percent of all duodenal ulcers. 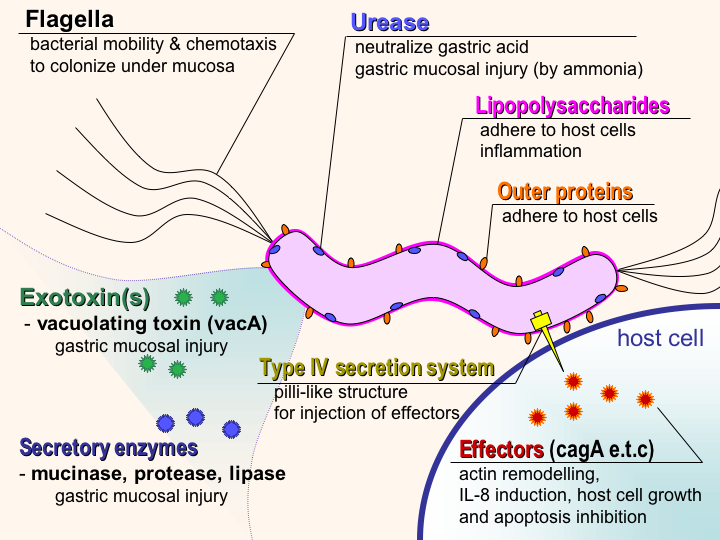 Complete eradication of the bacteria from the stomach environment has proved difficult because it's not easy to get high concentrations of the drug into the mucus layer. For this reason, avoiding potentially contaminated water and food as well as good hygiene (thoroughly washing foods before consumption as well as washing hands wish soapy water etc.) have been shown to be some of the best strategies of preventing H. pylori contamination.

A combination of drugs (bismuth subsalicylate, tetracycline, and metronidazole) are taken to treat these infections. While the treatment has been shown to be effective, it can also result in such side effects as mild diarrhea.

Apart from the antibiotics, infections can also be treated using proton pump inhibitors that are aimed at suppressing the production of acid in the stomach region.

Although treatment is successful in most cases, failure has been identified in about 20 percent of cases with first-line therapy. This resistance to antibiotics has been attributed to the fact that H. pylori can be invasive and continue to multiply in epithelial cells. Some strains (mutants) have been shown to be resistant to treatment.

Samples for microscopy may be obtained directly from the host through endoscopy. Tissue obtained can be processed using an automated tissue processor. Here, tissues fixed in paraffin are sectioned using a microtone in order to obtain small sections (of 4 micrometer in thickness) for staining.

The sections have to be dewaxed before being stained with Haematoxylene and eosin.

* Apart from H&E stain, Giesma and other special stains are also used for staining the bacteria.

Observation:  When viewed under the microscope, H. pylori may appear to be rod or spiral shaped. Since the bacteria does not retain the primary stain (a characteristic of gram negative bacteria) they will appear reddish/purple in color (color of the counter stain).

Return to Bacteria under the Microscope

Return to page on Proteobacteria