Definition: What is Budding?

This mode of reproduction is common in a number of unicellular and multicellular organisms including:

Fungi is a kingdom that consists of such eukaryotic organisms as yeasts, molds, mushrooms, and smuts among others.

It's estimated to consist of over 1.5 million species spread across the world that are divided into several, some of which include:

With the high diversity of fungi, both sexual and asexual modes of reproduction have been observed in different species. Whereas sexual reproduction is common in mycelia under adverse environmental conditions, they also produce through fragmentation (a type of asexual reproduction) under favorable conditions.

Spore formation is the most common mode of reproduction in fungi and allows them to spread and colonize new environments. Budding, on the other hand, is common in yeast cells and results in the production of an individual that resembles the parent. Apart from the nuclear material, other cell organelles including the endoplasmic reticulum, mitochondria, ribosome, and other cytoplasmic inclusions are also passed into the bud region as it continues to increase in size.

* During budding, replication of the parent DNA occurs through the S-phase characterized by DNA synthesis and the M-phase where DNA is copied.

At the constriction site, between the cell wall of the mother and the bud, studies have shown a ring consisting of chitin to develop (at the inner surface of the wall). As the chitin ring grows, causing the septum to grow inwards, the plasma membrane invaginates resulting in the formation of a primary septum.

Formation of a secondary septum is accompanied by the separation of the two cells with the chitinous primary septum remaining with the mother cell. This leaves the mother with a scar-like structure (bud scar) where the bud was separated.

* Once the new individual yeast cell has separated from the mother/parent cell, the parent can start the budding cycle. However, the new cell has to mature (and reach the size of the parent/mother cell) first in order to start budding.

By repeating this process, budding produces what appears to be chains of yeast cells. At the same time, the mother/parent cell may also start producing a new bud causing it to appear branched. This is referred to as the pseudomycelium and consists of loosely joined cells that break away easily over time.

* In the event of unfavorable environmental conditions, these cells form spores capable of surviving in adverse conditions.

* Depending on such environmental conditions as nutrition and temperature etc, budding cycles may range from 1 minute to several hours.

Bacteria are microscopic, unicellular organisms that can be found in a variety of environments (aquatic, terrestrial, human gut, etc) across the world. Unlike many organisms on earth, bacteria have a simple internal structure lacking a membrane-bound nucleus.

They are classified as prokaryotes. There are many types of bacteria that are classified on the basis of nutrition, general morphology, as well as where they are found.

Although binary fission is the usual mode of reproduction, some of the species reproduce through budding and are known as budding bacteria.

Examples of budding bacteria include:

* A majority of budding bacteria have been shown to attach to surfaces in their environment.

In some bacteria species, the budding process starts with de novo wall synthesis at given points of the parent cell. Normally, this occurs at one end (pole) of the bacteria. De novo synthesis in the wall is an important step in the budding process which ensures that the new individual daughter cell does not use the cell envelope material of the parent. This is then followed by DNA replication and ultimately separation of the mother and daughter cells in what is known as bacterial budding cycle.

In stalked bacteria, such as Hyphomonas neptunium, this process has been shown to occur through the stalk which acts as the reproductive organelle. Through cytokinesis (division of the cytoplasm during cell division to produce two new daughter cells), these cells give rise to stalked cells (non-motile) and swarmer cells which are flagellated and capable of swimming.

While the stalked cells are capable of entering the budding cycle, swarmers have to differentiate into stalked cells before they can go through this process. This results in the formation of a stalk on which the bud is produced. As is the case with yeast, the bud starts growing and is ultimately separated from the parent cell to become an independent individual capable of budding.

* For stalked bacteria, the stalk acts as the part of the cell body that connects the mother cell/parent cell to the bud.

* Here, cell division occurs at the junction between the bud and the stalk.

Being a prokaryote, H. neptunium has a single strand of circular chromosome that is about 3.7 Mb in size. It's replicated once per cell cycle in two main steps during the budding process.

Here, the first step involves moving one of the duplicated centromere-like region to the stalked pole of the mother cell. This region remains at this site until the bud starts to form. This region (centromere-like region) is then transported at the flagellated pole through the stalk where the bud is forming. The bud then continues growing in size before being separated from the parent cell.

Based on earlier studies, budding was divided into several categories based on the cells produced through the budding process.

·       Budding for multiplication - This results in the multiplication of the cells - Although the daughter cell produced is smaller than the mother cell, it grows to resemble the mother/parent cell

·       Budding for hyphal branching - Here, the budding process results in the formation of branches similar to those observed in actinomycetes. This is commonly observed in Rhodomicrobium and Pedomicrobium

·       Budding for sporulation - Based on microscopic studies, spores were found to bud out of the hyphae 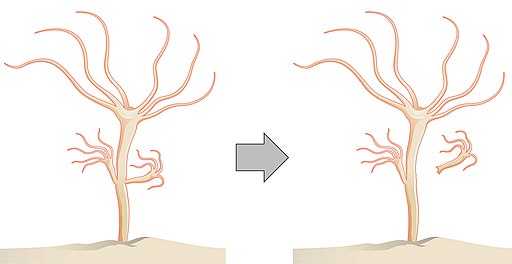 Budding in Hydra by CNX OpenStax / CC BY (https://creativecommons.org/licenses/by/4.0)

Hydra is a genus that consists of fresh-water organisms under the phylum Cnidaria. As such, they are related to such organisms as jellyfish and anemones that fall under the same phylum.

As compared to many other organisms, hydra have generated a lot of attention from the scientific community due to their regenerative ability that prevents them from aging (from undergoing senescence). For these organisms, budding is the main mode of reproduction and results in the production of a new individual that resembles the parent.

Some examples of hydra species include:

Based on research studies, a number of discoveries have been made with regard to the budding process in hydra. For instance, as compared to the rapidly budding hydra that can produce two or more buds, slowly budding hydras tend to be smaller in size.

A high intake of food material was shown to influence growth and reproduction while a lighter feeding schedule results in shrinking of the organism.

During budding, the process starts with the evagination of the ecto and endodermal cell layers at the lower part of the parent hydra. Based on molecular studies, a total of eight (8) different Hydra WNT genes have been identified at the tip of the bud. Although eight genes are expressed at the tip of this bud in the early stages of the budding, only one of these genes (Hvwnt2) is specific for the bud.

In order for the bud to grow and increase in size, epithelial cells are transported from the given regions of the parent body around the tip and into the bud where they contribute to its increasing size. Depending on the species and environmental conditions, the bud develops within 2 to 3 days before being separated from the parent body by a contracting ring.

Here, the contracting ring, located between the body wall of the parent hydra and the food of the bud, gradually contracts and slowly cuts between the two thus freeing the newly formed hydra.

* A parent may produce several buds at the same time - However, they tend to vary in size with some being bigger than others.

* Larger buds form new buds faster when they mature compared to smaller ones.

* If starved for about 6 days, hydra fail to produce new buds.

For hydra, cell division is very important for the budding process. Given that these organisms are continually producing new cells in high numbers, these cells are not treated as waste. Rather, they are transported to the budding region where they contribute to the growth of the bud.

Based on a number of studies, as many as 85 percent of newly formed structural cells are transported to the budding region – By inhibiting cell division, budding is significantly slowed or stopped altogether. Budding in Plants by CNX OpenStax / CC BY (https://creativecommons.org/licenses/by/4.0)

Essentially, plants are multicellular eukaryotes that are predominantly photosynthetic. They make up the kingdom Plantae and are among the primary producers on earth (other producers include some bacteria, algae, and moss among others). Like many other organisms, plants produce sexually through gamete fusion (in flowering plants).

In plants, the bud is known as a scion. For the most part, it's used in cases where a farmer (or propagator) desires specific characteristics above the ground (e.g. fruits , etc).

* A scion is a single bud and not a stem/twig.


In horticulture, a bud is cut from the budstick using a budding knife. Here, cutting, to remove the bud from a plant, starts about a half an inch from the base of the bud to half an inch above the bud. Here, cutting the wood (attached to the bud) is recommended. Once the bud is obtained, then it has to be immediately inserted into the understock in order to prevent drying.

To prepare the understock, A T cut is made on the stem/branch on which the bud will be inserted. The bud is then inserted under the bark and wrapped so that it remains in place.

* A union between the bud and the stem forms in about 1 week or 10 days.

Unlike other organisms discussed above, budding in plants involves obtaining the bud from one plant and inserting it on the step of another. Therefore, a bud is intended to develop on a given plant stem for desired characteristics.

As a means of reproduction, budding has a number of benefits. In plants, for instance, budding is a faster and effective form of grafting that allows the propagator to transfer given desired characteristics of the bud onto the stem of another plant.

Today, this method of reproduction is particularly used for the production of fruit trees, roses as well as various ornamental trees. One of the biggest advantages of this method in plants is that it allows for specific buds to be transferred onto stems that are already growing in favorable environmental conditions and thus continue growing.

In other organisms, this means of reproduction allows them to reproduce offspring in large numbers given that a single organism can produce by itself. This mode of reproduction also allows for good genes of the organism to be passed down to the daughter cell and so on.

Return for learning about Budding to MicroscopeMaster home

Enrico Cabib and Rowena Roberts. (1982). Synthesis Of The Yeast Cell Wall and Its Regulation.

ALL PAGES PROTECTED
DO NOT COPY