Definition: What are Hydra?

Hydra are a genus of small, fresh-water organisms that are classified under the phylum Cnidaria. In addition to being related to such organisms as jellyfish, they are characterized by their tiny, tube-shaped bodies that contain several tentacles on one end.

While several species have been identified, two of the most distinctive species include h. oligactis which is brown in color and hydra viridissima which is green in color (green hydra).

* The green coloration of h. viridissima is due to the presence of zoochlorellae, an algae that lives in symbiosis with the hydra.

Some of the other species include: With regards to height, these polyps range between 1 and 2 cm with tentacles being much longer depending on the species. For instance, the tentacles of green Hydra may measure about 5 cm in length (when relaxed) and up to 20 cm when extended.

* The body of a hydra may retract making the organism appear shorter and globular.

The aboral end (pedal disc) of hydra is flattened and play an important role in temporary attachment. This part of its body consists of the glandular zone involved in the secretion of adhesives that make it possible for the organism to attach to the substrate. However, it can also produce gas bubbles that allow Hydra to float.

The other end (head pole) consists of the hypostome which contains the mouth opening and tentacles (6-12) that are used to trap food in their environment.

On the external surface of the hydra, buds may be observed developing from the parent organism. Internally, hydra has a central cavity known as the coelenteron that acts as the gastrovascular cavity.

* Reproductive structures of hydra include the testis (consisting of sperm cells) and the ovary (carrying the egg) that are located under the ectoderm.

Body wall - As diploblastic organisms, Hydra have two types of tissue layers, namely; the ectoderm and the endoderm that respectively form the inner gastrodermis and outer epidermis separated by the mesoglea.

The epidermis acts as the protective and sensory layer and is covered by a thin cuticle. It's composed of epithelia-muscle cells (play a role in covering and contraction), gland cells (secrete the sticky attachment substance and gas bubbles), interstitial cells (involves in reproduction and regeneration) and the Cnidoblasts (specialized cells act as stinging cells).

Some of the other cells of the ectoderm include:

Unlike the ectoderm, the endoderm consists of the inner cell layer that lines the gastrovascular cavity of the organism.

The gastrodermis is largely involved in digestion and consists of the following cells:

·      Endothelio-gland cells - Smaller in size and include enzymatic gland cells (secrete enzymes for digestion) and mucous gland cells that secrete a slimy fluid that serves as the lubricant and a paralyzing agent.

·      Interstitial cells - Cells that can transform into other specialized cells.

·      Sensory and nerve cells - Located in the endoderm and play an important role in digestion. For instance, sensory cells are stimulated when prey is captured and transported through the mouth part to initiate digestion.

* The mesoglea between the two layers of cells consists of proteinaceous matrix and serves as the supporting lamella.

With regards to nutrition, Hydra are strict carnivores which means that they feed on other animals. As such, they feed on a variety of tiny organisms such as annelids, copepods, and cladocerans among others. To capture prey, Hydra contract and expand (a type of movement known as contraction burst) while attached to the substratum in their habitat.

The movement, initiated by a pacemaker at the base of the hypostome, allows Hydra to extend or sway their tentacles in order to capture prey. Once the prey comes into contact with the tentacles, it's intoxicated by the action of nematocysts (stinging cells) located in the epidermal cells (on the tentacles) before being led to the mouth opening through the contraction of the tentacles. The food is then drawn into the digestive cavity for digestion.

While all Hydra species are efficient predators, studies have found that some of the species are very selective with regards to their prey. For instance, whereas smaller Hydra viridissima prey on the larval stages of calanoid copepods and cladocerans, they do not prey on larger organisms such as adult ostracods. As well, larger Hydra salmacidis have been shown to prey on such organisms as adult calanoid copepods.

* The nematocyst venom produced by Hydra contains a hemolytic and paralytic protein of about 100kDa in weight (molecular weight). They also produce another protein of about 30kDa that induces long-lasting paralysis to the prey. 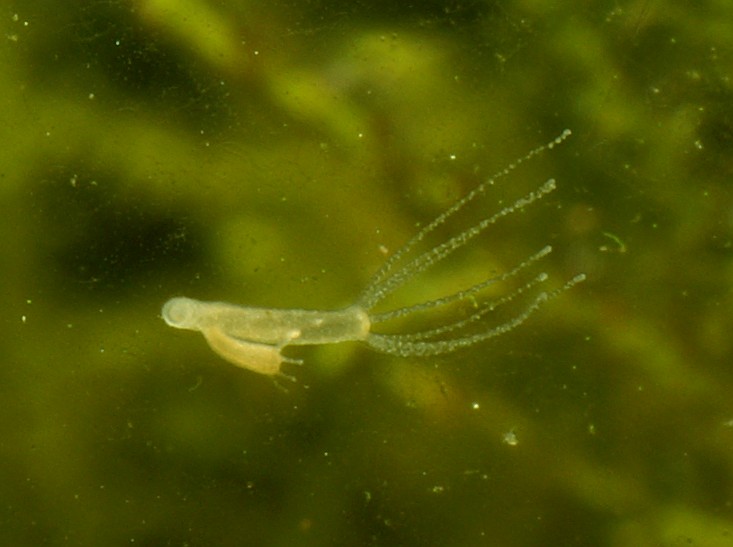 Hydra reproduce asexually through a process known as budding. For Hydra, this is the most common mode of reproduction and occurs under favorable environmental conditions.

During budding, a small bud develops near the basal part of the parent Hydra through repeated mitotic division of the epidermal interstitial cells. As mitotic division continues the cell differentiation results in the development of the coelenteron, the mouth part as well as the tentacles.

Once it is fully developed, it constricts as the base (point of attachment to the parent Hydra) and ultimately separates to become an independent organism. This process may take about 3 days from start to end.

* Asexual reproduction only requires one parent.

As a result, sexual reproduction in Hydra, as is the case for a number of other freshwater and marine organisms (e.g. oligochaetes, nemertines, and echinoderms, etc) is only limited to specific certain periods.

In preparation for sexual reproduction, gonads start developing from the interstitial cells of the epidermis and form a bulge on the body wall of the organism. Interstitial cells at the base of the conical outgrowth (testes) act as the spermatogonia that further develop through spermatogenesis transforming into the primary, secondary and spermatid stages to become spermatozoa (with a head and long tail).

Like the testes, ovaries are also formed through the multiplication of interstitial cells. This is followed by the development of one of the cells (Oocyte) as it increases in size and develops a large nucleus - a single ovary may contain one or two ovum.

* Testes are formed near the oral end of the Hydra while the ovaries form near the basal end.

Fertilization occurs when matured sperms cells from a ruptured testis are released into the water and one of the sperms reaches the ovum. Here, the fertilized eggs develop into a zygote.

The fertilized egg undergoes a number of steps that include:

·      Cleavage - The process that produces blastomeres - cells of equal size.

·      Blastulation - Results in the production of the blastula with a narrow cavity (blastocoel).

·      Gastrulation - The blastula starts reorganizing into a multilayer structure known as the gastrula.

·      Encystation - A cyst forms around the embryo allowing the embryo to survive changes in the environment. Here, the embryo remains dormant until environmental conditions improve.

·      Hatching - When environmental conditions improve, the embryo develops further by increasing in size and developing tentacles. This phase is also characterized by the rapture of the cyst. The new offspring then continues growing until it matures.

* Although some of the Hydra develop both male and female reproductive organs and are known as hermaphrodites. According to research studies, self-reproduction in Hydra is avoided in most cases.

The symbiosis between members of the phylum Cnidaria and algae (zooxanthellae) has been shown to be very common. Through this type of association, each organism benefits from the other. For instance, through their symbiotic relationship with algae of the genus Chlorella, Hydra (green Hydra) are able to synthesize their own food.

This presents a significant advantage to Hydra given that they can be able to synthesize their own food when environmental conditions change (food is scarce). As a result, green Hydra have a big advantage over brown Hydra which lacks the chlorophyll needed for photosynthesis.

This is only possible as long as green Hydra is exposed to sunlight. Despite being carnivores, green Hydra are able to survive for about 3 months using sugars produced through photosynthesis. This allows the organism to tolerate starvation (in the absence of prey).

* Through reproduction, green Hydra pass Chlorella to their offspring making it possible for the offspring to carry out photosynthesis in the absence of prey.

Essentially, regeneration refers to the ability of an organism to replace given lost or damaged parts. For instance, Geckos are capable of regenerating their tails when it is lost through the activation of a group of stem cells.

Although a number of other organisms can regenerate lost parts, Hydra has become one of the most studies organism due to its ability to regenerate even after being cut in half or being put in a blender and centrifuged. This ability, as well as the fact that Hydra are far less complex, has made them the ideal subject for regeneration studies.

* Hydra have been considered immortal due to their ability to regenerate any part of their bodies.

Although the mechanism through which Hydra are able to regenerate any part of their bodies so effectively is yet to be fully understood, a number of theories have been proposed based on a number of studies.

The following are two of the most widely accepted mechanisms:

According to a study conducted at the University of Geneva in Switzerland, head regeneration in Hydra was shown to depend on the transformation of stump into the head organizing center tissue.

* Immortality of Hydra - Hydra have been described as being potentially immortal due to the fact that they replace older body cells with new ones every 45 days. The growth zone below the tentacles contains interstitial cells that produce all the other cells.

As older cells are shed from either pole of the Hydra, new ones continue to replace the old ones allowing Hydra to continue living for a long period of time. The removal of these cells (growth zone cells) has been shown to cause the death of Hydra within a few days.

Hydra move from one point to another using a number of strategies. This allows the organism to change location in response to stimulus.

These movements are made possible by the epidermal muscle fibers and include:

·      Expansion and contraction - These movements allow Hydra to contract (shorten) and extend their body in order to capture prey using their tentacles.

·      Looping - This type of movement resembles that of smaller worms. Here, Hydra bend so that the tentacles touch the substratum. This is followed by the pedal disc moving closer to the tentacles allowing the organism to move to the direction it intends. By repeating this process, Hydra is able to move from one point to another.

·      Somersaulting - Using the head pole end of the body and the pedal disc, Hydra are able to somersault and thus move from one point to another. This type of movement resembles that of gymnasts.

·      Walking movement - This type of movement involves the use of tentacles. Here, the Hydra uses its tentacles as legs to move from one point to another.

·      Gliding - Hydra can also move through gliding on a surface. This is the type of movement resembling that of snails.

·      Swimming - By waving their tentacles in a similar fashion to squids, Hydra are able to swim in water.

·      Climbing - Climbing is made possible by tentacles which allow Hydra to hold on to given surfaces and climb up the surface (of leaves, etc).

Return to Pond Water under the Microscope

Anita Kaliszewicz. (2011). Interference of asexual and sexual reproduction in the green hydra. ResearchGate.