Definition: What are Red Blood Cells?

Commonly known as red blood cells, erythrocytes are a type of blood cell primarily involved in the transportation of oxygen to body tissues (from the lungs) and carbon dioxide from the tissues to the lungs to be removed from the body.

Red cells are characterized by their flattish, doughnut-like shape (without a hole) that allows them to effectively perform their functions. Unlike other blood cells (which may leave the vessels to carry out their functions), red blood cells remain within the vascular network from where they are transported throughout the body.

* Although red blood cells are involved in the transportation of oxygen, they do not use any oxygen they transport for respiration.

* The words "erythrocytes" and "red blood cells" will be used interchangeably in this article.

As previously mentioned, red blood cells are primarily involved in gas exchange in animals. Before looking at the process of gas exchange as performed by these cells, it's important to understand how they are adapted to their function. Structure and Adaptations of Red Blood Cells to their Function

One of the most important adaptations of the red cells is their general shape.

Generally, erythrocytes are shaped like a doughnut, without a hole in the middle. This is an important adaptation that allows the cell to effectively carry oxygen molecules.

Apart from their general shape that is perfectly suited to their function, red cells have also been shown to be capable of reverting back to this biconcave discoid shape after being exposed to external forces that cause them to undergo deformations.

This ability to endure such deformations (both in vivo and in vitro) has been attributed to their structure, surface area to volume ratio as well as various mechanical properties. While red blood cells have a very thin membrane, the membrane is made up of a lipid bilayer that is attached to a cytoskeletal network.

This feature of red cells allows them to withstand forces that may otherwise cause deformations. On the other hand, the internal fluid matrix of the cell, as well as the composite membrane, contributes to the viscoelastic behavior of red cells, which in turn allows them to travel through smaller spaces.

* Because of their ability to revert back to their biconcave shape after being subjected to various forces, erythrocytes are said to have shape memory. This, however, is not only with regards to the general shape of the cell. Rather, membrane elements have also been shown to return to their original position in the cell.

* Because of their viscoelastic characteristic, red blood cells are able to squeeze through very thin capillaries in order to deliver oxygen and remove carbon dioxide.

Red Blood Cells do not have a Nucleus

While the red blood cells of such animals as fish and birds have inactive nuclei, erythrocytes in humans and a number of other animals do not have nuclei or a nucleus. This allows the cells to contain more hemoglobin that is involved in the transportation of oxygen molecules.

Unlike the other cells in the body, red blood cells are made up of pigments known and hemoglobin (composed of 4 hemes (which gives erythrocytes the red color) and a globin protein). Here, the four hemes attach to a single protein to form a polypeptide chain. It is this particular structure that makes it possible for the cell to carry oxygen and transport it to other body cells.

* According to a study that was conducted in Whitehead Institute, it was shown that as the mammalian red cells approach maturity, a form of cell division results in the nucleus being ejected from the cell. Here, a ring of actin filament contracts and ultimately pinches off the part of the cell that contains the nucleus. This segment of the cell is then destroyed by macrophages.

* Red blood cells do not have a nucleus and therefore do not reproduce/cell division.

* The hemoglobin in the cell allows a single cell to carry 4 molecules of oxygen.

* The absence of a nucleus has also been shown to reduce the overall weight of red cells which in turn allows them to move faster as they transport oxygen.

Macrophages have also been shown to be involved in hematopoiesis where they produce signals that trigger the differentiation and proliferation of committed progenitors.

Following an average of 120 days of circulation, old red blood cells are removed from circulation by the action of macrophages (phagocytosis). Therefore, macrophages (from the spleen and liver) play a crucial role in the life of red cells from the moment they are produced to when they die.

While red blood cells are incapable of reproduction/cell division, as many as 2 million cells are produced in the bone marrow every second which ensures that a constant number of red cells is maintained. Like mast cells, erythrocytes are also long-lived cells (in comparison to other blood cells) with a life span of about 120 days.

Some of the material required for the production of red blood cells include:

Unlike other cells, red blood cells lack mitochondria. As a result, they rely on anaerobic respiration for energy. On the other hand, they lack endoplasmic reticulum (E.R) and therefore do not synthesize proteins as other cells do.

While this may sound like a disadvantage for erythrocytes, it is a big advantage with regards to their function given that they do not use the oxygen they carry. Rather, they can use energy obtained from anaerobic respiration as they transport all the oxygen they carry to other cells that need it. This ensures that no oxygen is wasted in the process.

Because erythrocytes lack mitochondria, they also lack the oxidative enzymes that are required for aerobic respiration. For this reason, Embden-Meyerhof pathway is used to process glucose and thus obtain energy. This is an anaerobic energy producing process that has been shown to use glycogen in the absence of glucose.

* While red blood cells do not have E.R in which proteins are synthesized, they have some protein that allow them to effectively perform their function.

For a majority of animals, oxygen is necessary for the purpose of respiration. That is, oxygen is needed for energy production. At the same time, carbon dioxide produced through this process (aerobic respiration) has to be removed from the body to avoid any harm to body organs. Here, red blood cells serve the role of a specialized transport system of these gases to and from the lungs and other body tissues.

* about 1.5 percent of oxygen dissolves in blood plasma

Here, hemoglobin in the red cells binds to the oxygen. Given that hemoglobin contains four hemes, it is capable of carrying and transporting four molecules of oxygen (and thus each cell can carry four oxygen molecules). In healthy individuals, hemoglobin saturation ranges between 95 and 99 percent. This means that almost all heme units are bound to oxygen molecules.

* Binding of oxygen to the heme groups causes blood carrying oxygen to appear bright as compared to deoxygenated blood.

* As the first molecule of oxygen binds, it results in conformational changes in the hemoglobin, which in turn makes it easier for the other three molecules to bind.

Unlike oxygen which binds to hemoglobin, carbon dioxide binds to the amino acid moieties present on the globin part to form carbaminohemoglobin.

Compared to red cells carrying oxygen, erythrocytes carrying carbon dioxide tend to be darker (dark maroon). As with oxygen, however, the binding and dissociation is as a result of partial pressure. Here, the gases move from an area of high concentration of the gas to the area of lower concentration.

In the pulmonary capillaries, however, the partial pressure of carbon dioxide is higher than is the case in the alveoli. For this reason, the gas has been shown to readily dissociate from the red cells and ultimately diffuse into the air through the respiratory membrane.

Some of the other mechanisms through which carbon dioxide is transported in blood include:

* As compared to carbon dioxide, carbon monoxide does not readily dissociate from hemoglobin. It has a greater affinity for hemoglobin than oxygen and will therefore readily bind to hemoglobin when present. As a result, it prevents the binding and transportation of oxygen to body tissues resulting in carbon monoxide poisoning.

Apart from blood smear technique that is used for red blood cell count, the hemocytometer is one of the devices that has been used for a long time to measure the number of red cells. 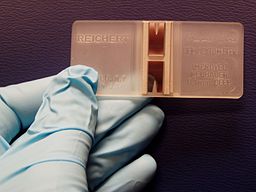 A hemocytometer: each of the two semi-reflective rectangles is a chamber for counting cells by Jeffrey M. Vinocur [CC BY-SA 3.0 (http://creativecommons.org/licenses/by-sa/3.0/)]

* The blood sample is diluted with normal saline (1:200) to reduce the number of red cells and thus make counting easier.

·      Place the clean glass slide/coverslip on top of the hemocytometer.

·      Using another clean pipette, introduce the mixture in the gap between the slide/coverslip and the hemocytometer - Make sure not to overfill the chamber.

To determine the number of red blood cells per microliter, the following formula is used:

Some of the other methods used for counting red blood cells include:

·      Hough Transform-Based Methods - This is an automatic method used to count both red and white blood cells using computer vision. Currently, a number of automated red blood cell counting methods that use .Hough transform have been introduced

·      Thresholding Based Method - Produces a binary image used to obtain the number of red cells.

·      Cell Structure and Intensity Based Method - This is the angular ring ration method that entails converting an RGB image to grayscale.

Blood smears are used in the laboratory for such purposes of observing red blood cells (for students) laboratory diagnosis of malaria as well as for the purposes of counting red cells. This may be achieved simply through wet mounts or using stains to get a better view of the cells. The smears prepared may either be thick or thin depending on the intended purpose.

* For a simple wet mount, place a small drop of water on a clean glass slide and add a drop of distilled water to view under the microscope.

·      Place a drop of blood on to the microscope glass slide

·      Using another glass slide or coverslip, touch the drop of blood and allow it to spread along its width

To form a thick film, place a drop of blood at the center of a clear glass slide and using a wire loop or edge of another clean slide, spread the drop of blood in a circular motion to obtain a smear of about 1 1/2 cm in diameter.

* Do not fix the thick smear

·      Before staining, fix the thin film using 99 percent methanol for about 5 minutes

·      View the slide under the microscope (starting with 10x magnification)

In a wet mount, red cells will appear colorless and the doughnut-like shape can be identified.

For a slide stained with Giemsa, red cells will appear pink in color with a brighter central part.

If malaria parasites are present, they can be seen inside the cells and will appear like tiny bluish rings.