Covering about 7 percent of earth's surface, lichens are described as a symbiotic association consisting of two types of organisms that function as a single unit. This relationship involves a fungus (heterotrophic partner) and algae or cyanobacteria (the autotroph).

This association allows the two organisms to benefit from each other and thrive in different environmental habitats across the globe.

While lichens were only thought to consist of a single fungus and a photosynthetic partner for a long time, a number of recent studies have identified a third partner in this association (a single-celled fungus - basidiomycete).

Today, it's estimated that there are about 20,000 species of lichens across the world.

As mentioned, there are an estimated 20,000+ lichens across the world.

Some lichen species include:

* Lichens can be found in different environmental habitats (terrestrial and aquatic) across the world. In nature, they are especially abundant on; trees and shrubs growing on the bark, plant leaves, moist rock and walls, roofs, and soil surfaces.

As mentioned, lichen is a composite that consists of different types of organisms.

This section will focus on these organisms and their respective significance in this relationship:

Some of the most common photobionts in lichens include:

In lichens, green algae are some of the most common photobionts/phycobiont, They are found in more than half of all lichen. Some examples of these algae include Trebouxia jamesii, Asterochloris, Trebouxia decolorans, and Trebouxia arboricola among others.

The majority of these algae exist as single-celled organisms. They vary in shape (spherical, ovoid, or irregular) and contain a large chloroplast (with chlorophyll A and B which gives them their green appearance) with a folded membrane. Within this structure (chromatophore) is the pyrenoid where carbon fixation occurs.

* Lichens that consist of green algae are commonly known as chlorolichens.

Brown algae are algae that belong to the class Phaeophyceae. As the name suggests, these algae generally appear brown in color. While the majority of brown algae exist as free-living organisms, some species like Petroderma maculiforme have been shown to form a symbiotic relationship with fungus to form lichens.

Here, however, microscopic studies have shown the structure to be penetrated by membrane invaginations of the cell plastid. These invaginations have been suggested to play an important role in the diffusion of carbon dioxide into the RuBisCo site.

Golden algae - The term Golden algae is used to refer to algae of the class Chrysophyceae. Like green algae, lichen forms of golden algae are single-celled and thus capable of living within the fungus.

While algae are the most common photobionts, cyanobacteria are also for a symbiotic relationship with fungus to form lichens. While they, like algae, possess a cell wall, cyanobacteria are prokaryotes and thus lack membrane-bound organelles (nucleus, Golgi bodies, mitochondria, etc.).

Some of the most common lichenous nostocs belong to the genus nostoc. Members of this group, which tend to be filamentous, are characterized by a complex life cycle (involving fragmentation or through the production of spores (akinetes)).

In addition to chlorophyll, which serves to trap light energy, these cyanobacteria also contain two additional pigments which include the blue phycocyanin and red phycoerythrin.

Morphologically, Nostoc cells are characterized by an ovoid, spherical, or cylindrical shape. Given that they contain chloroplast, they are capable of photosynthesis and thus produce simple sugars. In free-living forms, specialized cells (heterocysts) within the filaments contain nitrogenase enzymes involved in nitrogen fixation.

Unlike photobionts, fungi are heterotrophs and thus incapable of producing their own food. For this reason, lichenous fungi depend on algae or cyanobacterium for energy. Here, the autotrophs reside within the fungi (e.g. within the thallus of fungi) where they carry out photosynthesis.

In lichens, the fungus is the dominant member with most of the characteristics of lichens being attributed to the fungus. While some of the fungi here belong to the phylum Basidiomycota, the majority (more than 90 percent) have been shown to belong to the Phylum Ascomycota (ascomycetes) under the subphylum Pezizomycotina.

Based on some studies, some of the fungi found in lichens have also been shown to lack the enzymes required for degrading complex organic material in nature. For this reason, most of them are highly dependent on their relationship with autotrophs for energy.

Some the characteristics associated with fungi of the phylum Ascomycota include:

In lichens, they reside within the cortex of the primary fungus where they are responsible for the variations in lichen phenotypes.

In addition to being responsible for variation in the color of lichens, the new fungus is also said to be responsible for the production of certain chemicals that protects lichens from various organisms (other microorganisms and predators).

How are Lichens formed?

Following sexual reproduction, a few lichenized ascomycetes have been shown to retain cyanobacterium or algae cells in their ascomata. In this case, photobionts are dispersed along with the ascospores.

One of the methods through which some fungi acquire compatible photobionts (algae or cyanobacteria) is through parasitism. Also known as lichenicolous lichens, these fungi/lichens acquire photobionts by taking them from other lichens.

Here, parasitic lichens have been shown to use their germ tubes to invade the thalli of other lichens. In doing so, they establish a symbiotic relationship with these photobionts.

The other method through which lichens are formed involves contact between the hyphae of the mycobiont and a compatible photobiont cell. Here, however, it's worth noting that not all photobionts are compatible.

Following the dispersal of spores, they start developing and producing hyphae. It's when the hyphae come in contact with the compatible photobiont (cyanobacteria or algae) that the thallus starts forming.

Following the initial contact, the fungus has been shown to develop a crustose (a pre-thallus) from their soredia and non-stratified isidia. Here, the photobiont is first covered or enveloped by hyphae of the fungi.

Under favorable environmental conditions, the pre-thallus continues to develop to form a mature thallus in which the photobiont is contained over the lifespan of the lichen.

While the fungus undergoes some development before associating with the algae or cyanobacteria, fungal genomes that contribute to its morphogenesis have been shown to be influenced/activated by the presence of a compatible photobiont.

This becomes even more evident when considering the fact that the thallus continues to mature and develop following contact of the fungi with a compatible photobiont.

In most lichens, the primary fungus, the mycobiont, has been shown to be the dominant partner making between 50 and 90 percent of the total biomass. For this reason, most characteristics associated with lichens are attributed to the fungus.

Here, the fungus provides a conducive environment (e.g. protect the cell from harsh environmental conditions that would other destroy it) that allows the photobiont to grow, develop and carry out photosynthesis. This, however, is in contrast to some fungal parasites that may destroy the algae or cyanobacteria.

By providing a conducive environment for the photobiont to grow and develop, the fungus also benefits from the simple sugars produced.

* The majority of lichens can tolerate harsh environmental conditions. For this reason, they can be found in areas characterized by extreme temperatures.

In most cases, the structure consists of several layers that include:

Photobiont layer (algal or cyanobacterium layer) - The next layer (mostly located next to the upper and lower layer) consists of the photobiont cells. Here, these cells are held in place by fungal threads so that they are well-positioned to capture light energy.

In general, the different types of lichens are classified based on the general structure and morphology.

The following are different types of lichens: This type of lichen is generally characterized by a bushy or coral-like structure. They can be found growing on stems, branches or decaying woods, etc. (upright or in a hanging position). Here, the thallus allows the lichen to attach to the substratum.

Diagrammatic representation of a section of crustose lichen: 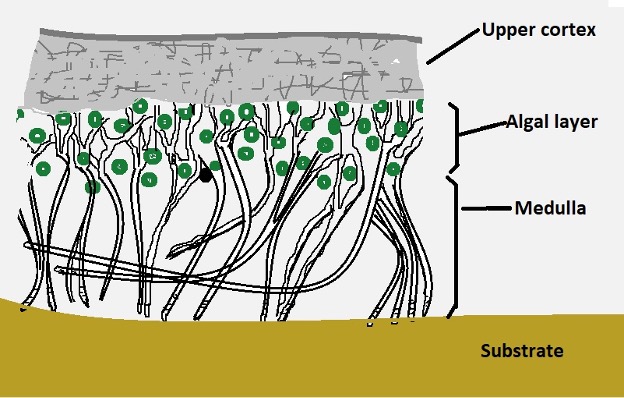 The upper cortex, on the other hand, protects the inner components, algal and medulla, from various environmental conditions. Because of the close association between the lichen and the substrate (tree bark, soil, or rocks, etc.), most crustose lichens are collected along with the substrate for study.

* On different types of substrates, crustose lichen (different in color from yellowish to which) have a patch or mold-like appearance.

* Another type of crustose lichen known as placodiod lichen is characterized by marginal lobes.

Diagrammatic representation of a section of foliose lichen: Like fruticose, foliose lichens have an upper and lower cortex as well as a layer of medulla. However, they only have one layer (on the upper part) of algae as well as basal structures known as rhizines through which they attach to the substrate. Rhizines may be absent in some foliose lichens.

Also known as leafy lichens, foliose lichens are characterized by a leaf-like appearance (flattened). Although they are commonly found on the surface of tree barks and branches, they can also be found on some rocks and some other vegetation.

Diagrammatic representation of a section of leprose lichen Due to the absence of a smooth protective thallus, leprose lichens have a granular/powdery appearance - This type of lichen can also be found on the surface of branches, tree barks, as well some rocks and other vegetation.

What do they do?

As mentioned, lichens can be found in different environmental habitats across the world.

The following are different types of lichens based on where they grow:

In nature, lichens have several important functions that include:

Nitrogen fixation - As mentioned, some lichens consist of cyanobacteria as the photobiont. By fixing nitrogen, the cyanobacteria (which form cyanolichens) convert atmospheric nitrogen into a form that can be used by plants.

As medicine - For a long time, lichens were used as medicine in different cultures. Today, it's well understood that various lichen products have antibiotic properties that can help treat diseases.

Return from What are Lichens? to MicroscopeMaster home