What is the Function of Calcium Signaling?

Distributed within the cell and in the extracellular matrix, calcium signaling acts as an initiator for a variety of processes related to muscle contraction, hormone, and neurotransmitter secretion, as well as fertilization.

Calcium has been shown to be the fifth most abundant element in the human body by weight.

Like the other elements (carbon, hydrogen, oxygen, and nitrogen) it impacts various aspects of cellular life and is essential for life and development.

The following sections will focus on the role of calcium signaling in:

This cycle is essential for a number of activities including movement, joint stability, maintenance of body temperature, as well as posture. Calcium is specifically required for the contraction of actomyosin fibers.

The fibers themselves are made up of rod-like organelles known as myofibril (or muscle fibril) which consist of myosin and actin. The two proteins (myosin and actin) are involved in contraction and consequently in muscle contraction.

* Actin and myosin (thicker and characterized by numerous heads) filaments are arranged into functional units known as sarcomere.

* Shortening of the sarcomere results in muscle contraction.

Diagrammatic representation of a sarcomere: Generally, muscle contraction requires a signal to activate the process. Following a nerve impulse, acetylcholine (neurotransmitter) is released onto the sarcolemma (the thin membrane covering the muscle fiber) and binds to the receptors which send a signal into the membrane.

Once the calcium ions bind to the troponin, they cause a conformational change that moves the troponin-tropomyosin complex in order to expose binding sites on the actin.

This allows myosin heads to bind to actin through the binding sites located on actin (ATP provides the energy required for the binding process). The release of ADP (following ATP hydrolysis) causes the myosin head to flex which in turn moves the actin into the direction causing contraction. This process is repeated when another ATP molecule is attached to the myosin head.

* When calcium ions are pumped back into the sarcoplasmic reticulum through the terminal cisternae, the troponin-tropomyosin complex is restored preventing actin and myosin heads from interacting.

* This cycle of muscle contraction is known as the cross-bridge cycle or the sliding filament theory. Here, calcium acts as a second messenger in the signaling process. 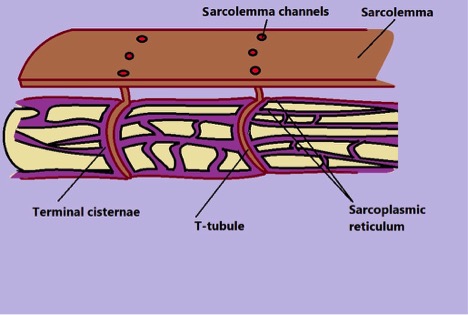 Mitochondria are primarily involved in the production of chemical energy (ATP). Given that cellular biochemical reactions are powered by ATP, mitochondria are some of the most important organelles.

Based on a variety of studies, calcium signaling has been shown to help in regulating this process. As well, signaling can also activate a series of events that ultimately results in cell death.

Most of the calcium ions enter mitochondria through the mitochondrial calcium uniporter. Because the uniporter has a low affinity for calcium, it's assumed that the protein functions as a channel, allowing the inflow of calcium with increased concentration in the matrix (made possible by an electrochemical potential gradient).

That said, it's worth noting that the molecular characteristics of the uniporter is still largely unknown. Aside from the uniporter, calcium ions can also enter the organelle through LETM1 (Leucine zipper-EF-hand containing transmembrane protein 1) and NCLX/NCKX6. However, these routes only allow entry in lower concentrations.

In doing so, calcium ions activate pyruvate dehydrogenase resulting in increased production of ATP following the increased release of NADH and FADH2.

In studies involving the protozoan T. brucei TcPDP and TbPDP were shown to be calcium-sensitive phosphatases. Activation of these enzymes by the influx of calcium into mitochondria resulted in an increased AMP/ATP ratio.

* With increased physical activities, studies have noticed an increase in matrix calcium and increased activation of mitochondrial dehydrogenases. These enzymes promote the increase of nicotinamide adenine dinucleotide and consequently ATP by fueling electron transport.

Initially, mitochondrial calcium was thought to be involved in the regulation of cytosolic calcium. In subsequent studies, however, the influx of calcium into the organelle was shown to have an impact on dehydrogenases (enzymes involved in the removal of hydrogen during oxido-reduction reactions) of the tricarboxylic acid cycle (Krebs cycle).

In hepatocytes and sensory neurons, this influx has been associated with an increase in NADH which shows that calcium promotes energy production.

The Krebs cycle takes place right after glycolysis (in the presence of oxygen). Here, pyruvate produced through glycolysis is converted into Acetyl COA by the enzyme pyruvate dehydrogenase complex.

This stage also results in the production of carbon dioxide and NADH. Acetyl-COA is then combined with Oxaloacetate to form citrate by the enzyme citrate synthase.

In the next step, the citrate, a 6 carbon molecule, is isomerized by the enzyme aconitase into isocitrate which is in turn oxidized to form Alpha-ketoglutarate (α-Ketoglutarate) by isocitrate dehydrogenase. This also results in the production of carbon dioxide as well as a molecule of NADH.

Guanosine triphosphate is also produced. Succinate is then converted to fumarate by succinate dehydrogenase. The QH2 (Ubiquinol) molecule released in this step is then used for the production of FADH2 (flavin adenine dinucleotide).

The fumarate is then converted to malate by fumarase. Lastly, malate is converted to Oxaloacetate by malate dehydrogenase. This step also gives off a molecule of NADH.

* A single cycle of the cycle yields 6 molecules of NADH and 2 FADH2 which are used to produce ATP energy.

High levels of calcium in the mitochondria have also been associated with programmed cell death (apoptosis).

Calcium-sensitive factors associated with apoptosis can also be found in the endoplasmic reticulum and cytoplasm.

Generally, an increased influx of calcium into the mitochondria is suspected to increase mitochondrial membrane permeability and eventually alter the structure of the membrane.

In doing so, calcium accumulation results in the opening of transition pores (mitochondrial permeability transition pores) and subsequent release of pro-apoptotic factors like cytochrome.

* In normal cells, cytochrome c is located in the mitochondrial intermembrane/intercristae spaces. Here, it's attached to the phospholipid cardiolipin and plays an important role in the respiratory chain.

Following the disruption of the outer membrane by calcium ions or any other factor, cytochrome is separated from the phospholipid and released into the cytosol. In the cytosol, cytochrome activates the apoptosis-protease activating factor which is vital for the proteolytic development of caspase-9 and 3 which are actively involved in cell destruction.

Whereas some of the calcium ions are released into the cytoplasm from intracellular stores (e.g. endoplasmic reticulum), others are imported from the extracellular matrix through the voltage-dependent calcium channels or receptor-operated channels.

Calcium signaling has been shown to play a role in several stages of transcription including:

During transcription, pause release is characterized by the release of paused Poll II (polymerase II) for elongation.

During this phase of transcription, calcium signaling can contribute to the phosphorylation of CDK9 (Cyclin-Dependent Kinases) at Thr-186. This is an important process that activates the kinase function of P-TEFb (positive transcription elongation factor) in polymerase regulation.

In studies involving HeLa cells, the inhibition of CamK and calmodulin (calcium-binding messenger protein) using KN-93 has been shown to reduce the phosphorylation of CDK9 Thr-186. This was evidence that calcium plays a role in the phosphorylation process.

In other studies involving CD4+ cells, the use of Thapsigargin (a non-competitive inhibitor) has also been shown to reduce the phosphorylation of CDK9 Thr-186. As an inhibitor, Thapsigargin prevents the re-uptake of calcium ions into the endoplasmic reticulum through the P-type ATPase SERCA.

As a result, the endoplasmic reticulum is unable to release calcium into the cytoplasm in response to signaling. As a result of calcium depletion, phosphorylation is hindered.

Transcription elongation involves the synthesis of the RNA chain as RNA polymerase moves along the template DNA strand.

Following pause release, a number of studies have reported that calcium is involved in regulating blocks associated with this process. For instance, the use of calcium ions ionophore promotes the elongation of fos transcripts.

This allows extracellular calcium to pass through the membrane and activate calcium signaling. When media without calcium ions is used, studies have revealed diminished fos induction.

* In rats, studies have also identified another calcium-regulated transcription block in exon 1 (a sequence of DNA in mature mRNA) of MKP-1.

Rate of Elongation and Alternative Splicing

Calcium signaling has also been linked to splicing as well as changes in the rate of transcription elongation.

This may take different forms. In rats, for instance, the modification of histones by calcium signaling has a direct impact on the rate of elongation.

One of the best examples of this is the acetylation of histone 2B following induction of calcium signaling by depolarization of hippocampal cells in rats.

For example, the influx of calcium ions following depolarization of mouse neuroblastoma cell line N2 has been shown to influence the skipping of NCAM (Neural cell adhesion molecule) exon 18. This, however, is largely dependent on the rate of H3 and H4 acetylation which is also influenced by calcium influx.

In another study, the depolarization of cardiomyocytes in mice was associated with the hyperacetylation of histones H3 and H4 as well as the subsequent splicing in the number of genes.

Termination of the Transcription Process

As the name suggests, transcription termination is the process where a new RNA dissociates with the polymerase and DNA template strand.  This, based on various findings, is a result of given stress conditions.

With respect to reproduction, calcium signaling plays an important role in the maturation of oocytes as well as fertilization.

* Oocytes are ovarian cells that can divide (through meiosis) to form an ovum.

Generally, a number of factors are involved in the maturation and development of oocytes in mammals.

For instance, Cyclic adenosine monophosphate (cAMP), which acts as a second messenger, is associated with the first meiotic arrest. As well, a surge in Luteinizing hormone (LH) triggers its (oocyte) maturation.

After the second meiotic arrest, embryo development is influenced by fertilization. Here, phospholipase Czeta from the sperm cells activates increased release and oscillations of calcium ions in the cytoplasm of the egg (calcium is released from intracellular stores of the eggs).

The calcium then binds to the calcium-binding messenger calmodulin, which in turn triggers Ca2+/calmodulin-dependent protein kinase II.

The kinase activates a signaling cascade that results in the down-regulation of the Maturation-promoting factor (MPF) and thus an exit from meiosis. However, this also allows for the resumption of the egg cycle (mitotic division).

* In studies involving mice, sperm lacking the PLC protein were found to be incapable of causing calcium oscillations in the oocyte.

Exocytosis refers to the process through which secretory vesicles fuse with the plasma membrane resulting in the discharge of vesicular contents into the extracellular space.

This process serves a number of functions including the removal of unwanted material from the cell as well as cell communication.

In synaptic transmissions, for instance, calcium ions help influence the movement of vesicles towards the membrane so they can release their contents.

Near the axon terminal, the influx of sodium ions causes the area to become positive (positively charged). This stimulates the calcium gated channels to open and allow entry of calcium ions.

At the synapse, calcium stimulates the vesicles to move towards and fuse with the membrane so they can release their contents (neurotransmitters) into the synaptic cleft.

From the synaptic cleft, these contents then move to the post-synaptic neuron where they bind to receptors and activate a given action.

* The release of neurotransmitters is inhibited if calcium channels are blocked.

Return From "What is the Function of Calcium Signaling?" to MicroscopeMaster home