Eosinophils Under The Microscope

Essentially, eosinophils develop from the multipotent hematopoietic stem cells that reside in the bone marrow. While they are some of the more rare leukocytes (making up between 1 and 4 percent of the total white blood cells in circulation) they play an important role in immunity particularly as initiators and propagators of various inflammatory responses during an infection as well as in adaptive immunity.

In particular, eosinophils play an important role in defending the body against infections and parasites that invade the body. A variety of studies have shown these cells to be multifunctional given that they participate in a variety of inflammatory processes that involve bacterial, allergies, viral infections and injury of the tissue among others.

When triggered, they respond in a number of ways including:

One of the best ways to view and identify eosinophils involves the use of Romanowsky-stain such as the Giemsa stain. This involves preparing a blood smear for microscopy. To stain the preparation:

When viewed under the microscope, eosinophils will appear spherical with a light purple body (of the cytoplasm) and dark blue/purple nucleus with two lobes (bi-lobed). Students will also be able to see course granules in the cytoplasm of the cell that may appear reddish orange (as dark spots) 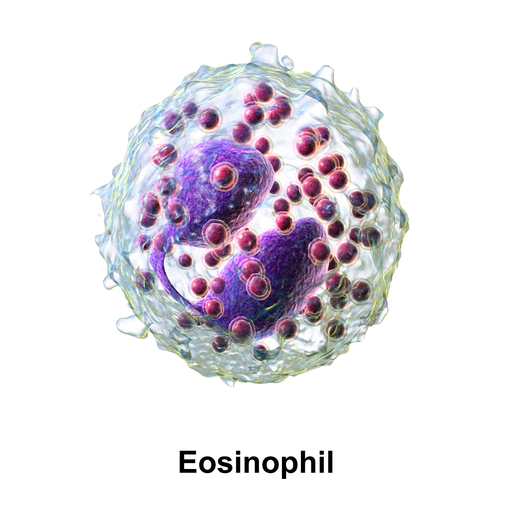 Like basophils and neutrophils, eosinophils are granulocytes, which means that they have granules in their cytoplasm. The large granules contain enzymes and proteins that serve different functions with regards to immunity.

As previously mentioned, once triggered, they release a variety of molecules that contribute to the eosinophil response.

For the most part, these molecules present pro-inflammatory effects including:

These cells also function by initiating antigen-specific immune responses through a process where they behave like antigen presenting cells. By releasing toxic proteins and lipids mediators from the granules, eosinophils are also capable of not only inducing tissue damage, but also degrading other foreign organisms in given tissue.

Return from Eosinophils to Cell Biology