First discovered in 1875 by Walther Flemming, centrosomes are important organelles primarily involved in cell division and are commonly found in animal cells.

Also known as major microtubule-organizing centers (MTOC), the centrosome is the primary site of microtubule formation and spindle formation. It consists of a pair of centrioles within the pericentriolar material (an electron-dense matrix).

Aside from cell division, centrosomes are also involved in the following:

• Maintaining the number of chromosomes

*   Centrosomes were described in 1888 by Theodor Boveri.

Within the animal cell, a centrosome is located next to the nucleus. However, it also has links to the Golgi apparatus and other structures like the actomyosin cytoskeleton. Within the centrosome, there is a mass of proteins that make up the electron-dense matrix. The centrioles are located within this matrix and are generally oriented at a 90-degree angle with respect to each other (orthogonal arrangement).

Like some of the other intracellular structures, the centrosome is small in size measuring between 1 and 2 um in diameter. As such, it can be 3 to 6 times smaller than the nucleus.

*   In some organisms, the centrosome can be found in the invagination of the nuclear         envelope.

*   The mother and daughter centrioles are linked to each other by striated fibers.

*   As compared to cycling cells where the centrioles are contained in the centrosome,           centrioles in non-proliferating cells are converted to basal bodies. Here, they play an       important role in the assembly of primary cilia.

In vertebrate cells, the centrioles measure about 250nm in diameter and 150 to 500nm in length. As such, they have been shown to be some of the largest protein-based intracellular structures.

When viewed from the proximal end, the "blades" of the microtubules normally have an anticlockwise twist. The centrioles also have a lumen which consists of a cartwheel structure among other features. Although the function of the cartwheel is yet to be well understood, it's suspected to play an important role in the assembly process of the structure.

*   Microtubules are formed through the polymerization of tubulin Duplication is an important process through which new pairs are produced for the daughter cell. For this reason, the duplication of centrosomes occurs once per cell cycle. During this process, the morphology and location of the organelle change momentarily.

In animals, the first centrosome is formed through the interaction of sperm centrioles and the centrosomal components from the egg. This is an important process that promotes cell division early on during development. The duplication process of centrosomes, on the other hand, takes place through the four main stages of cell cycle including G1, G1/S, S, and G2.

Early on in the S phase, a cell contains two centrosomes given that it has not yet fully divided. At this point, the centrosomes are referred to as discrete bodies of pericentriolar material.

While the cell contains two centrosomes, they have been shown to vary in two major ways; one of the centrosomes contains the oldest centriole. This is characterized by the presence of distal appendages as well as cenexin protein (a dense fiber protein).

Secondly, the centrosome with the oldest centriole contains pericentriolar material with e-tubulin. During the G2 phase, a period of rapid growth, the new centrioles grow in length as the matrix of one of the centrosomes acquires e-tubulin.

During the transition from M2 to the M phase characterized by nuclear division and cytokinesis, one of the centrioles in the aforementioned centrosome starts to develop distal appendages and cenexin proteins. As the M phase begins, there is a significant increase in pericentriolar material of the matrix as well as an increase in nucleated microtubules.

Some of the other characteristics of centrosomes and centrioles include:

Centrioles are polar structures - As polar structures, centrioles have positive and negative ends. These ends have been shown to be morphologically and functionally different. For instance, as compared to the proximal end, the distal end is positive and contains complex proteins (e.g. CP110 and CEP97) which are involved in the formation of cilium. Moreover, subdistal appendages are generally formed closer to this end rather than the proximal end.

Two centrosomes, during cell division, are separated through the actions of several motors including XCTK2, cytoplasmic dynein–dynactin–NUMA complex, and kinesin-related motors pEg5.

The centriolar lumen consists of an interconnected system of ligaments that serves to connect the microtubule triplets. However, the structure of these connections is not uniform from the proximal to the distal end which causes morphological differences at the two ends. Regardless of these differences, the lumen helps stabilize the overall structure. 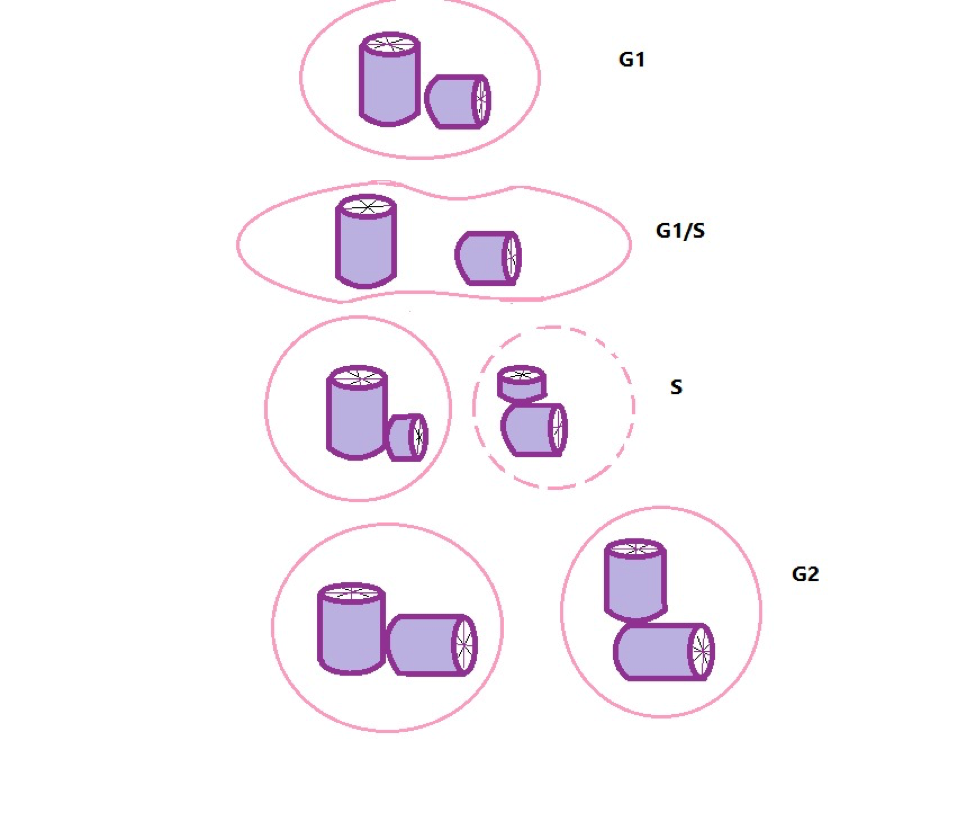 Role of Centrosome in Mitosis

Mitosis refers to the process through which a cell divides to form/produce two identical daughter cells. This is especially important for the growth and replacement of dead or worn-out cells.

A number of changes occurring during prophase commit the cell to mitosis. A good example of this is the addition of phosphate groups to some of the proteins through a process known as phosphorylation. Before this, however, the process can be arrested preventing the cell from progressing into the other stages (e.g. in the event of cell damage).

Prophase, which is the first stage of mitosis, is characterized by the appearance of centrosomes. When viewed under the microscope, they are a pair of tiny spots/dots surrounded by a clear region. In prometaphase, the nuclear envelope begins to break down as the chromosomes start interacting with the centrosomes as well as their microtubules.

With the chromosomes separated, the spindle undergoes disassembly resulting in the formation of stem bodies. In the last stage of mitosis (telophase), chromosomes are organized in order to form nuclei at the two opposite poles before the cell completely divides into two.

*   Early on in mitosis, various studies have discovered an increase in pericentriolar material. This has been shown to promote the organization of microtubules into mitotic spindle filaments that are involved in the process of cell division.

Spindle fibers are particularly important because they help in the separation and replication of chromosomes and direct the division of the cytoplasm. The spindle consists of microtubules that run between the poles. In this arrangement, one end of the microtubules is located at the pole while the other is associated with the kinetochore of the chromosomes. It could also be free in the spindle and thus not attached to any structure.

Other microtubules known as aster radiate outward from both poles and extend in every other direction within the cytoplasm. These microtubules serve to separate the centrosomes as the cycle progresses.

As the spindles form during mitosis, tubulin subunits are incorporated at the positive ends of the microtubules (the equator). These subunits are then gradually moved to the negative/minus ends at the centrosome poles. Also known as subunit flux, this dynamic activity is suspected to play an important role in the movement of chromosomes. Moreover, it might also play a role in balancing forces within the spindle allowing the two halves (halves of the spindle from both poles) to remain symmetrical.

As mentioned, motor proteins also play a vital role in mitosis. They can be found at various regions of the spindle including the centrosome poles, kinetochores, chromosome arms, and along the microtubules.

Different types of motor proteins can be found in specific regions where they are involved in the functions that contribute to mitosis. For instance, the protein cytoplasmic dynein is normally linked to the kinetochores and the plasma membrane. With respect to structures like the kinetochore, it serves to move them to a given direction along the microtubule.

In cases where the motor proteins bind to microtubules of the opposite polarity, they can move them so that they no longer overlap. In doing so, they enhance mitosis by helping reorganize the microtubules and ensure they function properly. Some of the other functions include promoting the disassembly of the microtubule positive/plus ends (e.g. kinesin) and collection of some microtubules.

*   During mitosis, normal cells only contain two centrosomes. The presence of more than two centrosomes can cause genetic defects that in turn produce cancerous cells and tumors. Therefore, under normal circumstances, several mechanisms exist to ensure that a centrosome is only replicated once during the cell cycle.

*   Although spindles originate from the centrosomes, studies have revealed that bipolar spindles can also be formed in the absence of these organelles. This occurs through self-organization where nucleated microtubules are assembled by chromosomes and microtubule-dependent motor into a bipolar structure.

Aside from mitosis, centrosomes are also involved in ciliogenesis which is the process through which cilia are formed. In many vertebrates, these projections (primary cilia) are largely involved in various signaling pathways which are essential for cellular responses.

Once the centriole docks to the membrane, the cilium develops through a series of events that include an extension of axonemal microtubules, formation of the transition zone, as well as the trafficking of machineries like intraflagellar transport complexes.

As for the intracellular pathway, the process starts with the recruitment of vesicles at the distal appendages of the centriole, and their consequent docking and fusion. This results in the formation of a ciliary vesicle which is deformed to produce a nascent ciliary structure within the cell. Eventually, the fusion of the vesicle with the plasma membrane allows the mature primary cilia to extend into the external environment outside the cell.

During interphase, centrosomes have been shown to regulate the organization of microtubules. In turn, this influences the shape, polarity, and motility of the cell.

For instance, in the case of non-polarized fibroblasts, the centrosome is normally located near the central part of the cell where it is linked to the nucleus. In this state, microtubules from the organelle radiate into the cell cortex.

During would healing, however, the centrosome is gradually oriented between the nucleus and the cell's front/leading edge so that they are closer to the wound edge. This not only guides cell migration to the direction of the wound but also promotes the movement of Golgi apparatus and microtubules towards the wound edge. Whereas Golgi apparatus are involved in the feedback loop that sustains a polarized state during wound healing, the microtubules serve as structural and functional regulators in the process.

Centrosomes have also been found to play a role in:

Phagocytosis - Phagocytosis refers to the process through which a cell engulfs particles. This is an important process that allows for the ingestion and destruction of foreign particles in the body by specialized cells. Centrosomes can promote phagocytosis by regulating changes in the shape of the membrane allowing the cell to ingest given particles.


Return from Centrosomes to MicroscopeMaster home

Breslow, D. K. and Holland, A. J. (2019). Mechanism and regulation of centriole and cilium biogenesis. National Library of Medicine.