Salmonella includes a group of gram-negative bacillus bacteria that causes food poisoning and the consequent infection of the intestinal tract. While some of the infections can be easily treated, some of the strains have been shown to resist antibiotic treatment and are therefore deadly. For this reason, infections should not be underestimated.

There are two major species that include: The genus Salmonella is closely related to Escherichia coli bacteria and is suggested to have diverged from the bacteria (E. coli) about 150 million years ago. As such, it has adapted and can be found in several niches in the environment.

Several methods of classification of Salmonella have been suggested so far. No single method/approach has been unanimously agreed on.

The following is one of the most recent classifications as used by the Center for Disease Control (CDC) as per recommendations by the World Health Organization (WHO):

The following are subspecies of Salmonella enterica:

* In addition to the subspecies, there are also various serotyes of Salmonella that have been suggested to range from 2,200 to about 4,400 serotypes/serovar.

* Serotype grouping is based on cell surface antigens.

With regards to Salmonella serotypes, the bacteria has been shown to possess three types of antigen. These include antigen H (flagella antigen), antigen O (somatic antigen) and Vi (capsular). These antigens play an important role when it comes to grouping or serotyping the organisms.

* Serotyping is conducted using a pure culture of the organisms isolated on non-selective agar. Some of the media that may be used include: Triple Sugar Iron (TSI), Tryptic Soy Agar (TSA) or Nutrient Agar.

According to scientific studies, Salmonella has evolved (from E. coli) for over 150 million years through genetic alterations, which has resulted in changes in pathogen ecology.

By evolving into a complex group composed of well over 2300 genetically/phenotypically diverse serotypes, the bacteria has been shown to be capable of infecting a wide range of hosts (both vertebrates and invertebrates).

Over the course of their evolution, Salmonella has also proven to be capable of adapting to and surviving in different habitats in the environment and are therefore referred to as environmental Salmonellae.

The following are some of the ecological niches in which different species and serovars of Salmonella can be found:

Water - Species like S. enteriditis have been shown to survive in water. While various other serotypes have been shown to be able to live and survive in such water bodies as streams, lakes, and river etc, their survival and lifespan is largely dependent on a variety of factors such as temperature, level of oxygen, contamination (animal faces etc.) as well as competing flora among others.

For instance, for some species, reproduction has been shown to be largely favored by warm temperature of the water as well as contamination by animal feces which provided a source of nutrients. In these environments, aquatic fauna such as frogs can act as reservoirs, playing a secondary role in the spread of the organisms.

Sewage - Serovar like S. paratyphi B have been shown to live and multiply in sewage sludge at about 10 degrees Celsius. In one particular study in Sweden, the bacteria could not be attributed to any animal source and was therefore suggested to live freely in this particular niche.

In the event that such sewage is discharged into other environments such as rivers, sea and soil, it can spread and continue to multiply. This is also one method through which they can ultimately infect animals and human beings.

While transmission to humans from some birds has been reported, most of the birds, including gulls have largely been shown to play a vector role, transferring the bacteria from one site to the next.

Wild and zoo animals have also proven to be sources of exotic and rare serovars. The carrying rate of these animals is largely dependant on the type of animal and their habitats. In reptiles, diseases are not frequently reported as is the case with some birds and wild animals.

* Agricultural and domestic animals have been shown to contribute in contamination especially through the human food chain. Given their exposure to the bacteria in their environment, poultry have been shown to be a significant source of Salmonella.

Salmonella species can also be found in:

* Salmonella survive in simple celled organisms like amoeba. In these organisms, the bacteria uses a secretion system to protect itself from enzymes that can degrade it.

Salmonella bacteria are facultative anaerobes that are capable of fermenting glucose, mannitol, and sorbotol.

As such, a majority of Salmonella bacteria have the following characteristics:

* While a majority of Salmonella bacteria ferment glucose, mannitol and sorbotol, S. arizonae are capable of fermenting lactose.

* The fermentation of sugars by Salmonella results in the production of acids or gas.

Salmonella are also catalase positive and oxidase negative, characteristics that are also used for the purposes of determining the presence of the bacteria.

Some of the other characteristics used to identify the presence of the bacteria in biochemical tests/reactions include:

* Catalase is an important enzyme found in Salmonella (as well as all other living organisms that are exposed to oxygen). In these organisms, the enzymes are involved in the decomposition of hydrogen peroxide to produce oxygen and water. This helps protect against the cell oxidative damage. 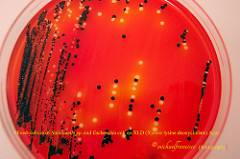 Naturally, infection is acquired through ingestion of water or foods contaminated with the bacteria. However, it may also be acquired through contact with any of the carriers mentioned above.

With over 2500 serovars of Salmonella identified today, more than 1500 have been shown to belong to subspecies enterica. This group is also composed of the majority of bacteria that infect different types of hosts.

Different types of Salmonella affect different hosts, which has led members of the subspecies to be divided into three major groups based on the type of host they infect (wide host specificity).

Infections caused by these organisms:

Infections in the host include:

* With regards to host specificity, typhi and paratyphi serovars only cause diseases in human beings.

Apart from host specificity, several other factors play an important role in the successful infection of the host.

In human beings and some animals, Salmonella is of clinical importance as they cause salmonellosis and enteric fever. Salmonella infection (salmonellosis) often results in diarrhea, fever (because of inflammation) as well as abdominal cramps that occur 1 to 3 days after infection.

While the infection can last a few days and pass without any treatment, some instances, particularly severe diarrhea, require treatment.

Some infection can spread to the blood stream resulting in toxic shock that can cause death if not treated.

Those at high risk of this infection include:

* Also known as typhoid fever, enteric fever is caused by S. typhi and S. paratyphi and presents the following symptoms:

The process through which Salmonella infects and affects human beings in salmonellosis is different from enteric fever.

With regards to enteric fever, oral infection is followed by two weeks of an incubation period after which the bacteria gets to the mucosa layer through the M cells. The infection then proceeds to the local macrophages that transport the bacteria to the mesentarial lymph nodes.

Ultimately, the bacteria can spread to such organs as the lung and liver among others resulting in such complications as empyema, cystitis and typhoid hepatitis.

For the most part, Salmonella infections are the result of drinking contaminated water, eating uncooked meat, poultry and seafood, uncooked eggs and contaminated fruits and vegetables. It can also be caused through contact with certain pets such as amphibians and reptiles.

Most infections can be prevented by minimizing contact with such pets, particularly for children as well as good hygiene. Here, hygiene involves washing hands with water and soap before eating (and generally keeping them clean), washing all foods before cooking as well as sufficiently cooking meat products that potentially carry the bacteria as well as washing hands after touching pets. These are important prevention tips to avoid infection and the spreading of Salmonella infections.

In some cases, treatment is required. In such cases, treatment involves the use of antibiotics and antimobility drugs as well as replacing fluids and electrolytes. Such drugs as loperamide are used for the purposes of relieving cramping among patients. However, this has been associated with such side effects as diarrhea resulting from the infection.

A Salmonella sample can be obtained directly from the patient (feces) or from contaminated water/foods. The bacteria may be cultured first using the appropriate agar/media to increase the number of cells.

When viewed under the microscope, Salmonella bacteria, such as Salmonella newport will appear as pink rods. This indicates that it is a Gram-negative bacteria.

Return to Bacteria under the Microscope main page

Return from Salmonella to MicroscopeMaster home