Bacteria are single-celled organisms within the domain Prokaryota. They can be found almost everywhere on the planet with varying characteristics that allow them to survive in their respective habitats, with the exception of a few places like the geothermal field of Dallol, Ethiopia.

In the majority of bacteria species, DNA exists as a single circular chromosome. However, some of the bacteria carry two chromosomes while others have linear DNA.

See information on DNA and chromosomes.

Some of the other characteristics associated with bacteria include: 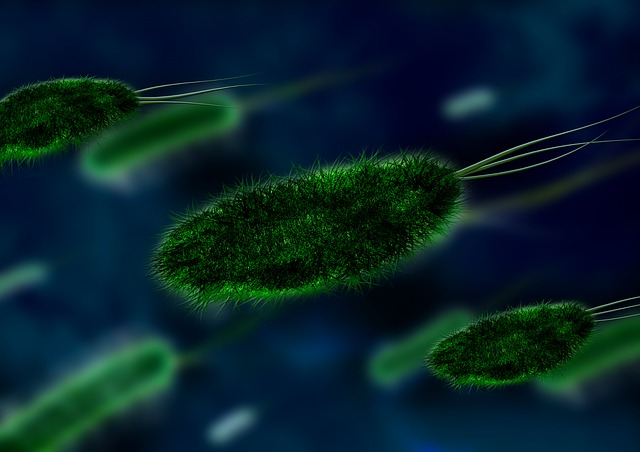 Like many other single-celled organisms, bacteria propagate through cell division (binary fission for most bacteria). Here, under favorable conditions, the bacteria grow in size before dividing to give rise to two daughter cells.

During binary fission, the genetic material of the organisms is copied so that each daughter retains the genetic characteristics of the "parent" cell. The daughter cells then repeat this process under favorable environmental conditions.

Some of the other less popular modes of reproduction in bacteria include:

Because bacteria can clone themselves through cell division, it can be said that they live forever (under favorable conditions). However, different species can survive for varying periods of time under unfavorable conditions. Moreover, others can form cysts that allow them to survive harsh conditions for weeks to years.

According to an article that was published by Luis Villazon on science focus; some spores have been brought back to life from crystals that were estimated to be over 250 million years old. This shows how resilient some species can be under the right conditions.

Under normal circumstances, however, bacteria will divide every 10 to 15 minutes. This suggests that the average life span of many bacteria is about 12 minutes (from when they are produced to the moment before they divide). However, some bacteria can divide every 4 minutes while others can divide once every 24 hours. This is largely dependent on the species and the surrounding conditions.

Also known as programmed cell death, apoptosis is the process through which unwanted cells are eliminated. This is especially important during embryo development as well as the removal of damaged or faulty cells. Moreover, the process has been shown to play an important role in the elimination of excess brain cells so as to streamline nerve impulses.

* In most cases, apoptosis can also prevent cancer cells from surviving and proliferating.

While the idea of apoptosis or apoptotic-like processes in bacteria is highly contested, a number of studies on such processes have shown apoptosis to play an important role in response to various external stimuli.

In bacteria (e.g. some Bacillus and Myxococcus species), apoptotic-like processes (programmed cell death or rapid cell death) has been shown to play an important role in such events as the lysis of the "parent cell" during sporulation, lysis of some vegetative cells, as well as the transformation of DNA liberated from bacterial cells going through spontaneous autolysis. This type of response has also been identified among some bacteria cells exposed to various unfavorable conditions (e.g. exposure to antibiotics).

* One of the most common forms of programmed cell death in bacteria is autolysis. This typically occurs when the cell is exposed to various harmful conditions like antibiotics.

Here, the cells have been shown to produce autolysins (peptidoglycan hydrolases) that digest the cell wall. 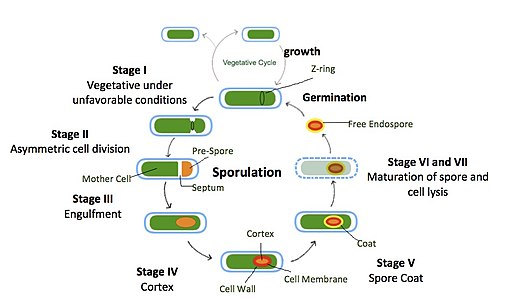 Sporulation is an important stage of the reproduction cycle in some bacteria that allow them to adapt to changes in their surroundings.

Unlike active cells, spores, produced through sporulation, can survive through unfavorable conditions for an extended period of time thus allowing the organism to survive until conditions improve.

In species like Bacillus subtilis, the "parent cell" undergoes lysis in order to release the spores.

CwlB is one of the most common autolysins. Based on a variety of studies, the autolysin is produced at the end of the exponential growth phase of the bacterium (Bacillus subtilis).

After the exponential growth phase, bacterial cells enter the stationary phase (bacteria population remains constant) before the population starts to decline with increased death of cells (there are more cells dying than new ones are being produced during the death phase).

As conditions start to deteriorate at the end of the stationary phase, bacterial cells (B. subtilis) start preparing by forming spores that will survive when conditions worsen. However, in order for the spores to germinate once conditions improve, they have to be released into the environment.

For this to happen, the autolysin (CwlB) is produced in order to digest the cell wall and release the spores.

* Autolysis also allows for the release of nutrients from dying cells. The nutrients released are then used by other cells to produce the energy required for sporulation.

Programmed cell death in bacteria has also been observed during gene exchange.

In Streptococcus pneumoniae, lytA is the gene responsible for the main autolysin. Here, autolysis is a well-regulated mechanism that ultimately results in the digestion of the cell wall in order to release genetic material into the surrounding.

The DNA is then picked by other cells and integrated into the existing DNA (recombination). This is an important process that introduces new characteristics that can help the cell adapt better.

In some cases, this has been shown to help bacteria become more resistant to various antibiotics.

Formation of the Fruiting Body

In bacteria, the fruiting body refers to the aggregation of cells in response to changes in their surroundings.

In culture, autocides consisting of fatty acids and glucosamine have been shown to activate autolysis in M. xanthus and consequently induce the development of a fruiting body (where spores are produced).

Here, autolysis contributes to sporulation through the formation of the fruiting body and therefore allows the bacteria to survive unfavorable conditions.

* While bacteria can commit “suicide” through apoptotic-like processes (autolysis or rapid cell death), this has been shown to eventually result in favorable outcomes. As mentioned, this may result in the transfer of genetic material from the dying cell or to sporulation.

These are important events that either introduce new favorable characteristics or at least allow the organisms to survive for extended periods of time.

Return from "How Long do Bacteria Live?" to MicroscopeMaster home