What is Bacterial Conjugation?

Definition: What is Bacterial Conjugation?

Essentially, conjugation refers to the process through which bacteria exchange genetic material. This process is often regarded as the bacterial equivalent of sexual reproduction/mating given that it involves an exchange of genetic material between two cells (recipient and donor).

It's particularly important for bacterial evolution but also has serious consequences for human health given that the process has been associated with instances of antibiotic resistance.

Some of the components involved in conjugation include:

Transduction - This the type of exchange in which DNA from one bacterium is accidentally transferred to another bacterium by a virus.

Transformation - In this type of exchange, the recipient bacteria obtain genetic material by taking up DNA strands floating in their surrounding. 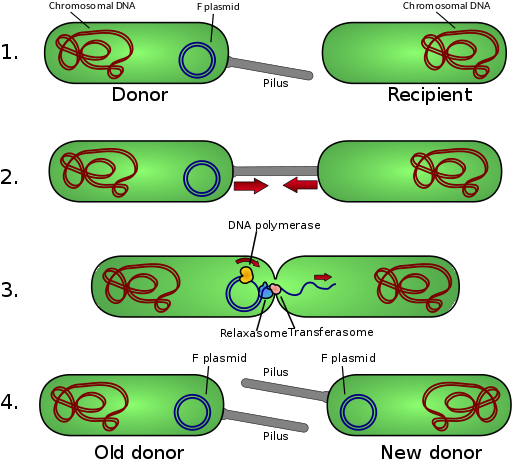 For the majority of bacterial species, asexual reproduction (e.g. binary fission, etc) is the most common means of multiplication. Under favorable conditions, this allows them to reproduce within a short period of time and increase in numbers.

One of the downside to this, however, is the fact that these bacteria are genetically identical (this is because the same genetic information is passed down to new generations).

Depending on the species, a number of factors have been shown to influence conjugation in bacteria. In E. coli, for instance, the transfer of plasmid through conjugation has been shown to occur within a wide range of conditions.

For others, this process is triggered by unfavorable conditions. Under certain conditions, genes known as tra genes/transfer genes are activated (turned on) which allows for a secure and successful transfer of genes.

Given that bacteria normally produce asexually, transfer genes are generally inactive (off). However, in the presence of such signals as changes in environmental conditions (oxygen levels, reduced nutrients, etc) or increased cell densities (including the presence of recipient cells), etc, the expression of these genes is induced followed by the assembly of the appropriate machinery required for conjugation.

For instance, following the expression of transfer genes, the assembly of T4S machinery and formation of Dtr complex follows.

* Secretion of inhibitory peptides (Phr1) and conjugation pheromones by the recipient allow donors to sense their presence in the environment.

As mentioned, changes in environmental conditions can activate conjugation. This is largely dependent on the species of bacteria and how changes in these conditions affect the cell. In some strains of Vibrio cholerae, for instance, the status of the integrated conjugative element is kept inactive (Off) by a repressor protein (similar to lambda CI repressor).

In the event that the DNA experiences some level of damage (by DNA damaging agents such as high temperatures or chemicals), then the protein is inactivated thereby inducing an SOS response.

Such genes as the tra genes are activated and facilitate the conjugation process. These processes are also evident with nutritional changes in the environment.

As mentioned above, conjugation is the process through which genetic material is transferred from one bacterium (donor) to another (recipient). Apart from chromosomal DNA, genetic material also exists in the form of a plasmid.

In bacteria, the plasmid (F plasmid) is a circular molecule of DNA that is about 100kb in size. They are separate from bacterial chromosome and have been shown to carry genes that contribute to drug resistance.

Plasmids play an important role in their transfer from one cell to another given that they encode genes that facilitate this process.

* Not all plasmids are transferred through conjugation.

F stands for fertility factor (F factor) - This is a sequence of DNA material that is transferred during conjugation.

Some of the functional regions of the plasmid include:

·       Leading region - This region consists of DNA sequences located between oriT, and RepFIA. This region is assumed to be the first part to enter the recipient cell during conjugation.

It also consists of the RepFIB (which can maintain replication of the plasmid in the absence of RepFIA) and the RepFIC region composed of the remnants of the replication system (incomplete).

·       Transposable elements - Involved in the integration events of the F-chromosome.

Depending on the species, DNA molecules transported from the donor to recipient include dsNDA (double-strand DNA) and ssDNA (single-strand DNA).

Compared to dsDNA, ssDNA transfer is ubiquitous among bacteria and archaebacterial species. Currently, the transfer of dsDNA has only been identified in Actinobacteria. Conjugation starts when two cells (donor (F+) and recipient (F-)) come into contact. This contact is established when the F pilus of the donor comes in contact with the cell surface of the recipient. In different species, pilus retraction has been observed in the absence of triggering events.

Following contact, however, this association is then stabilized in a manner that resists shear force. Here, various products of the F plasmid are involved in the synthesis of pilus as well as the aggregation process, evidence that F plasmids are actively involved in their own transfer.

* Apart from the F pilus, adhesins produced by the donor cell also contribute to this contact between the two cells.

* For the process to be successful, the two cells have to be functional. In cases where the recipient cell carries mutations that alter the structure of the membrane, this has been shown to affect contact/interaction between.

Transportation of Genetic Material through the Cell

Based on cell wall structure, bacteria are divided into Gram-positive (G+) bacteria and Gram-negative (G-) bacteria. Due to these differences, the transfer of genetic material across the wall may require different mechanisms.

Because Gram-negative bacteria have an outer membrane, they have to pull DNA across the outer membrane (OM) and inner membrane (IM) during conjugation. They also have a thicker peptidoglycan layer that has to undergo transformation in order to allow DNA to pass through.

Based on molecular studies a sophisticated protein complex located in the outer membrane of Gram-negative bacteria have been shown to play a role in pulling in exogenous DNA through the periplasm. Here, the complex first binds to the DNA and pulls it in.

The assembly of type IV pilus contributes in pore formation on the outer membrane of the recipient resulting in the formation of a pore that accommodates the DNA before it's pulled in.

In the periplasm (between outer and inner membrane), the DNA is again bound to ComEA (substrate-binding protein) and translocated across the inner membrane. This allows a single strand of dsDNA to be transported to the cytoplasm of the recipient cell.

* Due to the presence of various elements involved in the “push” and “pull’ mechanism of transferring genetic material to the cytoplasm of the recipient cell, the sex pilus has been suggested to only serve as a hook that allows the cells to remain attached during conjugation.

* In the donor cell, a group of elements known as integrative and conjugative elements (ICEs) have been shown to "push" the DNA strand so that it can be transported across the cell membrane of the recipient cell

During conjugation, two bacterial cells have to be in contact with each other (this contact is established by a pilus and athesins). For the transfer of genetic material to take place, one of the cells must not have the F-factor. Therefore, one has to be the donor and the other a recipient.

It's also capable of encoding for proteins required for conjugation in order to transfer genetic material to another cell. For instance, because the recipient cell (now a donor cell) has the F factor, it's capable of coding for sex pilus involved in cell contact and transfer of genetic material.

As compared to donor bacterial cells with F plasmid, Hfr cells (high-frequency recombination) are strains in which the F factor is integrated into the chromosome of the host.

As with F plasmid in other cells (as described above) the genes of the F factor in these cells is involved in mediating the transfer of genetic material from the donor cell (with Hfr) to the recipient cell.

Transfer of DNA from Bacteria to Eukaryotes

In particular, this behavior has been recognized among members of the class Alphaproteobacteria that have a parasitic or symbiotic relationship with eukaryotic hosts.

According to studies, this occurs through mechanisms that resemble normal bacterial conjugation under the regulation of bacterial T4SS (IV secretion system).

While the process is yet to be fully understood, it's suspected that T4SS pilus, coded by the bacteria, create pores on the barriers of the host cell by piercing through it. This allows for the direct injection of genetic molecules along with some protein material into the cytoplasm of eukaryotic cells.

The internalization of these materials has also been suggested to occur through the involvement of host receptors f endocytosis. Genetic molecules (released on the surface of the cell) are not injected into the cells of the host but rather internalized through host receptor mechanisms as well as endocytosis.

* Within the host cell (eukaryotic), molecular reaction (involving transferred DNA and proteins) are largely dependent on interactions with host factors. Here, nuclear important machinery of the host contribute to integration (of bacterial DNA).

* Today, bacterium-to-eukaryote gene transfer is being used to study and understand the evolution of eukaryotes.

As compared to asexual reproduction through binary fission etc, conjugation allows for genetic material to not only be transferred between members of the same species but also between different genera and even organisms. One of the biggest advantages of this process is that it facilitates evolutionary adaptation of the organism to different environments and habitats.

Through genetic transfer, bacteria are able to gain new characteristics that allow them to adapt and thus survive in environments they may not have survived in before. A good example of this includes bacteria becoming resistant to antibiotics which allow them to continue thriving. See: How do antibiotics kill bacteria?

Conjugation has made it possible for scientists to study evolutionary mechanism facilitated by conjugation processes. In the process, they have also been able to study how bacterial species (and other microbes) develop antibiotic properties which have in turn made it possible to develop effective treatments.

Return from Conjugation to MicroscopeMaster home

Benoît Lacroix and Vitaly Citovsky. (2016). Transfer of DNA from Bacteria to Eukaryotes.

Günther Koraimann and Maria A. Wagner. (2014). Social behavior and decision making in bacterialconjugation.

Neville Firth, Karin Ippen-Ihler, and Ronald A. Skurray. Structure and Function of the F Factor and Mechanism of Conjugation.